With four teams doing most of the winning in April, this side really is concentrated towards those few, with Moreland Zebras in particular impressing this month with four wins on the trot. North Geelong, St Albans and Ballarat also featured prominently in the XI.

GK: Alex Baird (St Albans Saints)
The former Newcastle United custodian has been tidy for St Albans and performed his duties when called upon. Featured in all four games for month and kept clean sheets in the latter two.

RB: Pat Karras (Ballarat Red Devils)
Having overcome a 4-1 defeat against Dandenong City to begin the month, Karras was outstanding in his side keeping two clean sheets in wins against Melbourne City and Sunshine, while only conceding once in another win against Bendigo City.

CB: Matt Townley (North Geelong Warriors)
While the month started with two goals each against Kingston (2-2) and Bendigo (7-2), North Geelong really tightened up and kept clean sheets against Whittlesea (0-0) and Moreland City (2-0), both teams with very potent strikers. Captain Townley was instrumental throughout these games for his consistency at the back, also scoring against Bendigo to add to his good month.

CB: Ryan McGuffie (St Albans Saints)
Like Townley, the captain has been part of two clean sheets to cap off the month, and has also scored in April. While the month started in a 1-0 defeat to Thunder, it improved with a 5-2 win against Werribee in which McGuffie scored a penalty, and then two clean sheets against Melbourne City and Sunshine George Cross.

LB: Liam Scott (Moreland Zebras)
A consistent display week-in week-out, Scott has been part of the defensive fulcrum that only conceded three times in four games. The fullback was able to maintain a high level of performance defensively and also in getting forward up the wing.

CM: Brad Murray (Moreland Zebras)
Playing a full 90 minutes in each of the four games except against Bendigo, where he picked up a yellow card, Murray has been tireless in the Moreland midfield, providing an excellent link between defence and attack for the Zebras

CM: Michael Trigger (Ballarat Red Devils)
Having played every game in April, Ballarat’s attackng mif was famously deployed as a keeper against Melbourne City in Round 7, keeping his side’s first clean sheet of the season. Also scored a penalty against Sunshine, taking his season tally to three.

RAM: Joseph Monek (St Albans Saints)
His usual busy self on the wings, Monek regularly kept defences on their toes and provided some key contributions for the month, including the winner against Sunshine and a provided a number of other goalscoring opportunities.

AM: Atilla Ofli (Whittlesea Ranges)
While his side’s form has dropped off lately, Ofli’s April form continued where he left off in March, scoring three times in Rounds 6 and 7 to give himself a buffer at the top of the Golden Boot race.

LAM: Baggio Yousif (Moreland Zebras)
It’s obvious, really. Goals, and plenty of them. After scoring a hat-trick in Round 1, he then went on a mini-drought for four weeks. But Yousif came roaring back, netting each game from Round 6 to 9; including numerous times against Bendigo and, more impressively, the previously in-form Whittlesea Ranges, where a hat-trick capped off the most impressive solo performance yet.

Ever since coming to North Geelong, it’s all been a bit, well, Eze for the American. Making it in time for April, he netted against Kingston, Bendigo and Moreland City to help the Warriors to an unbeaten run for the month. Despite having never tried tuna before coming to Australia, he’s proven to a fine kettle of fish for opposition defences. 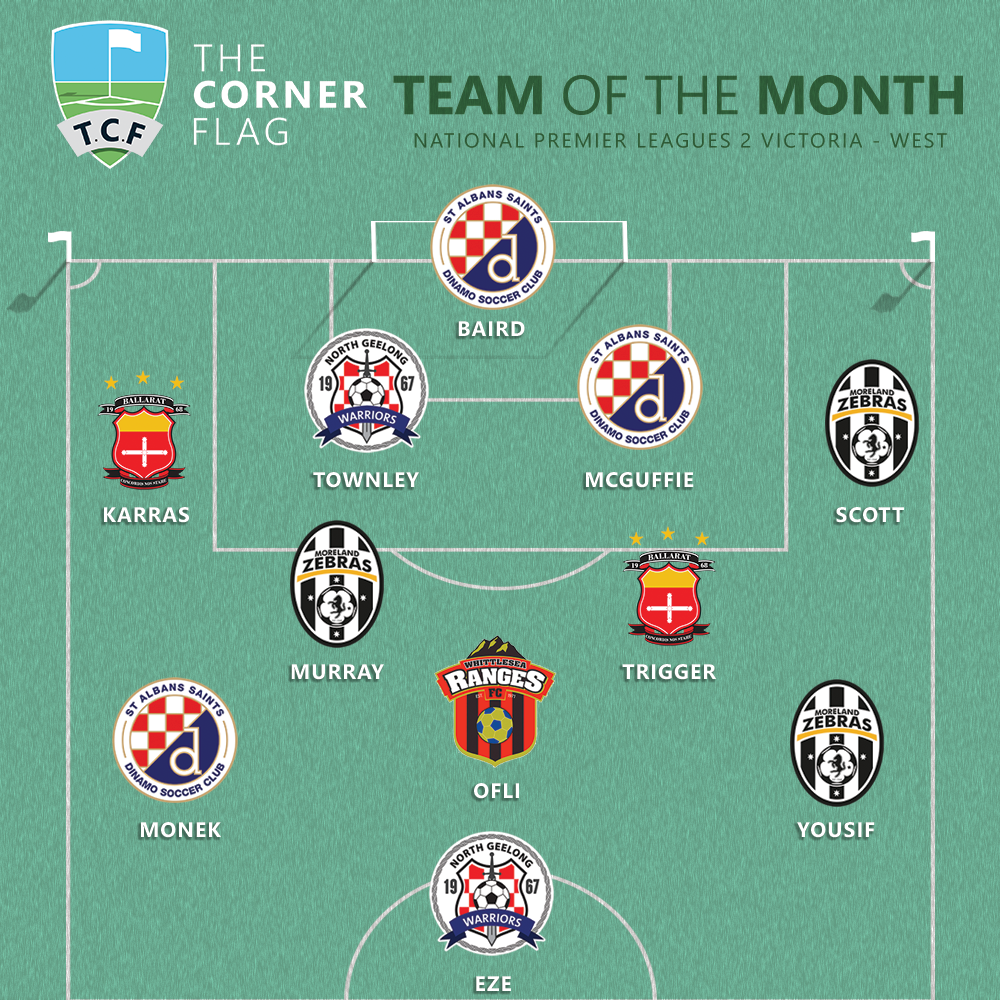 James Papadimitriou (Moreland Zebras)
A dramatic winner against Sunshine and a hat-trick against Bendigo underscores Papadimitriou’s month, in which he was unlucky to miss out on a starting spot after keeping in touch with the league’s top scorers.

Nathan Long (North Geelong Warriors)
Geelong’s number 99 has also had a fantastic month since Nicholas Jurcic’s move to a more advanced position. Has contributed to the recent clean sheets with commanding performances on his wing.

Lisandro Paz (Moreland City)
In an otherwise disappointing April for Moreland City, Paz’s month was personally a bit more productive, scoring three times in four game. This included a double against Whittlesea, a heartbreaking game which surely looked like Moreland would win before a late comeback, and the winner next week against Werribee City.

Nejc Kolman (Moreland Zebras)
Another Zebras player to feature in each four games, highlighting both the consistency of performance amongst the Zebras, but also the stability for Danny Gnjidic when it comes to selecting a weekly XI, which no doubt has helped with results. Kolman added a goal against Whittlesea to continue a stellar month for player and team.

Delfin Mosibe Esara (Werribee City)
His tally this month was three goals in three games, and while Mosibe’s Werribee team struggled once more in April, he did score twice against St Albans and helped the Bees to a respectable draw against Melbourne City with a 60th minute strike, almost also netting the winner that game.