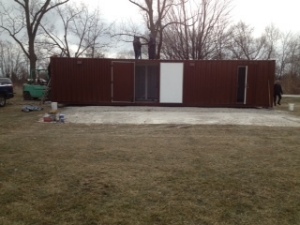 After 5 years of lobbying to the City of Toronto, The Etobicoke Kangaroo's are proud to announce the completion of an on-site storage unit and changing space for the Club at Humber South.

The task, 5 years in the making, is a testament to the behind the scenes work that Greg Everett and Bill Conway put in and the football club and supporters would like to thank them for their continual work and also express great appreciation to all those involved in seeing the structure come together.

The Etobicoke Kangaroo's need help though! In order to move all the club's equipment from the current storage container at the Cool Brewery and other equipment based at Humber south we are calling on your assistance to help move into the new facilities.

WHO: CALLING ALL ETOBICOKE KANGAROO - PLAYERS AND SUPPORTERS

TIME: 10am at the Brewery or 12pm at Humber South

This is a great opportunity for the club to come together early in 2013 and any support is greatly appreciated. Beers will be provided at the new facilities thanks to Cool Brewery.