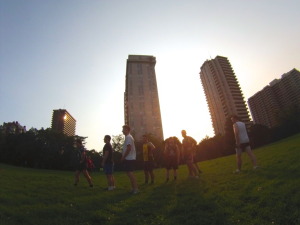 The Toronto Dingos made it back to back wins this week, after Div.2 and Div.1 both claimed wins.

Three games were scheduled this week for the Toronto Dingos. Div.2 had two make-up games on Thursday and Friday against High Park and Toronto Rebels; Div.1 had their Rnd11 match against the Eagles on Saturday.

Div.2 look set for a strong finals campaign after beating the undefeated league leaders Toronto Rebels by 10pts in a hard fought affair on Friday night. The match against the Demons on Thursday night was not played for premiership points as High Park only had nine players.

Div.1 bounced back from a big loss in Ottawa to claim a 106-pt win against the Eagles in a 14-a-side match on Saturday. The Dingos took a three-goal lead into quarter time, which was then extended to 47-pts by the main break. In the second half the Eagles only managed 1.2 as Div.1 piled on another 10.7. Big Butch kicked a career best of nine goals for the match. Captain Shaun McKay was also among the best kicking 3.4.

With one round remaining, Div.2 are locked into another final’s campaign and will go close to claiming back to back flags, while Div.1 have to rely on an Etobicoke Roos loss to Hamilton and must win against High Park for an unlikely shot at the finals.