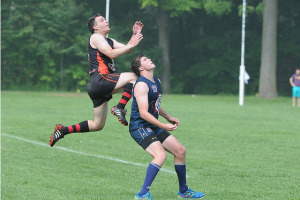 Playing in intense heat and humidity down at Humber South, the Dingos came away with two important victories over the Blues.  The Div 2 boys kept their undefeated season alive running over the Blues by 111, while the Div 1 club fought and clawed to win by a 40 point margin.
The Dingos Division 2 squad arrived at Humber South on Saturday morning looking to remain undefeated as they took on the Central Blues. Despite very hot conditions, the ground was quite wet from thunderstorms the night before, so the first quarter saw both teams struggling to control possession.
An unorthodox coaching move saw leading goalkicker Paul Tinkler start at full back, with Joel Beasley taking his usual position in the forward line. Joel was a strong target all match, kicking six goals and providing plenty of pressure when the Blues had possession.
The Dingos midfielders were competitive all day and won the vast majority of centre clearances for the match. Alvin Ranchhod (3), Mick McFarlane (2), Rainer Haycraft and Kevin Mulholland (both 1) were all able to impact the scoreboard during their stints on ball, while new Dingo Rob Eckford and veteran Stephen Gordon provided a dominant ruck-forward combination that the Blues struggled to match.
Despite a very competitive first quarter, the Dingos were able to run away with the game as the Blues low numbers saw them run out of steam in the hot weather.
Final score:
Dingos 18.10. 118
Blues 1.1. 7
Goals: J. Beasley 6, A. Ranchhod 3, P. Tinkler 3, M. McFarlane 2, S. Gordon, R. Haycraft, R. Eckford, K. Mulholland
Huge congratulations to Rob Eckford for a great effort in his first game as a Dingo!  Well done.
With their coach Justin Robertson unavailable for the game, veteran Aussie Tom Humphries stepped up to take charge of the Div 1 boys under increasingly sweltering conditions at Humber South.  Despite a pre-game talk focused on setting the tone early, the Dingos came out a little flat and gave up the first goal on a free kick to the Blues.  The boys settled down, however, and began to sort themselves out across the middle of the ground.  Ruckman David Giles, playing his first Div 1 game, was doing well to compete and provide opportunities for onballers Alex, Shauny, and Gauto to pump the footy forward.  On the bigger Humber South ground, the big targets Wado and Fridgy were able to create some space up front and take some solid marks.  After a quarter, the Dingos led by a goal.
The Dingos were able to extend their lead to 16 points in the second quarter, but overall it was a flat effort.  Once again, they gave up a quick goal to start the quarter, giving the Blues a huge lift.  As well, the Blues' onballer Shorty was able to get loose and carve up the Dingos with his speed on several occasions.  For their part, the Dingos seemed subdued in the heat and gave up some needless free kicks.  At halftime, assistant coach Wade Edwards let the boys have it, slamming their lack of effort and talk on the field.  The challenge now was how would the boys respond, facing the tough conditions and a rejuvenated Blues squad?
With Spider in the ruck, the Dingos opened the third quarter by taking charge across the middle.  Playing more direct footy, they created more scoring opportunities and were able to pressure the Blues' backmen.  On the defensive front, the Dingos fought and battled to keep the Blues at bay.  A typical play in the quarter saw the Dingos pinned deep in their own end, only to have Wellsy smother a shot for goal.  Out of the ensuing pack, Shauny broke free to drive the ball long to Noddy on the forward flank, who got the footy in deep to the forwards.  This huge swing resulted in a goal and gave the boys some breathing room, up 20 points heading into the last quarter. 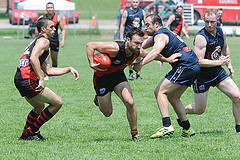 The final quarter saw the Dingos bear down and limit any movement forward by the Blues.  Denis and Bossey (playing in his 50th game!) did well roaming off the halfback line, disrupting the Blues and dishing off to Geoff and DMac across the middle.  Alex also had a ton of the footy in the quarter, getting it on the boot and feeding the big boys up front. Pinning the footy deep, the Dingos had 11 scoring opportunities in the quarter, but some wayward kicking kept the score tight.  Finally, the siren sounded giving the boys a huge victory in tough conditions and solidifying their place on the AFLO ladder heading into the final third of the season.
Final Score:
Blues 7.1.43
Dingos 11.16.82
Goals: Wade Edwards (5), Rob McNaughton (3), Mitchell Stewart (2), Camilo Serpa
BOG: Geoff Hansen, Dave Wells, Alex Aitken, Wade Edwards, Andrew Gaut
Next up, the Division 1 boys have a huge test versus the Etobicoke Kangaroos and will be looking to avenge a close loss from earlier in the season.