Interview: Ryan Caron on getting the nickname Jedi, big hits and strongman competitions 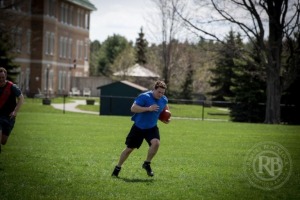 Ryan Caron joined the Toronto Dingos this season and has played five games in Div.1 mainly as a defender. His strength and pace are two of his best attributes which makes him a tough opponent to line up on come game day. Improving in every match, here’s more on the season so far from the bloke we affectionately know as “Jedi”.

How did you hear of the Toronto Dingos?

Fellow Dingo Big Jim “the destroyer” Invited me out last season to come and watch a game and introduced me to the team.

What sport did you play prior to Aussie Rules?

How do you find the cross over, what is difficult/easy?

Footy is the first sport that I’ve needed to pass with my feet so in that aspect its very challenging. However the pace and flow of the game is not to different to what I’ve experienced in the past.

Your nick name is Jedi, how did that come about?
That was given to me way back by a close friend of mine who is also very strong in the force.

Apart from Aussie Rules what else are you interested in?

Along with training for the Dingos, I compete in strongman competitions.  I spend a lot of my time in my car or riding my bike. I love anything that's fast and/or loud."

Who is your favourite Dingo and why?
All the guys on the team are champions. Very hard to crown one specifically.

Best moment with the club so far?

I’d have to say the Barrie training camp was a blast. I’m sure we will be able to top it soon.