Dingos win fifth in a row 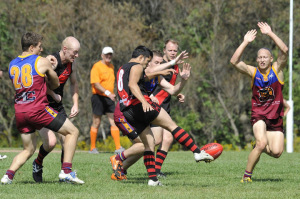 The Toronto Dingos have won their fifth game in succession, defeating the Guelph Gargoyles by 64 points and strengthening their hold on second place on the AFLO ladder.

On a hot Saturday at Humber South, the red and black showed up looking to beat Guelph for the second time in 2013, and it was clear from the start that everyone was up for the challenge. The Dingos came out of the gate hard, putting pressure on Guelph every time they had the ball and forcing them into turnovers. Tom Evans, playing his second game for the Dingos, hit the scoreboard first before Wade Edwards followed up with a couple of goals of his own. When Rainer Haycraft’s and Camilo “The Latino Sensation” Serpa added their first goals of the day, the Dingos had a 31-point lead to carry into the break.

Having held the opposition goalless in the first quarter for the second week in a row, the Dingos were keen to maintain the effort and intensity for the remainder of the match. Unfortunately, this was not the case as the Gargoyles drew first blood in the second quarter after a lapse by the Dingos defence left one of their forwards wide open in front of goal. The Dingos responded quickly, though, as Wade put through his third of the day to bring the lead back out to over five goals. The remainder of the second quarter was quite scrappy, as only one more goal was scored (by Guelph) before the half time siren sounded.

Everett Wells had battled strongly in the ruck during the first half, left to play the unfamiliar position due to the absence of regular ruckmen Tom Bell, D’Arcy Hill and Kristian Frantzen. He started off the third quarter by winning a free kick from the opening bounce and setting up a play that would lead to the first goal of the second half, as Wade popped through his fourth. Denis Cormier quickly followed up with a major of his own, as Butch unselfishly dished off the ball to the 2012 Dingos’ best rookie. The Gargoyles continued to press, replying with a goal of their own, but the Dingos’ backline tightened up and managed to restrict Guelph’s opportunities. The three quarter time siren sounded with the Dingos out to a comfortable 39-point lead, and well aware that the game was almost won.

Coach Justin Robertson reminded the red and black that it was Guelph that had ended their 2012 season, and urged his players to not let up for the final quarter. His message was well received, as the midfield continued their dominance and the forward line made the most of their opportunities. JV Arnaldo kicked his first goal of the season from a tight angle, before Camilo put the result beyond doubt with the goal of the day from a tight angle at high speed and under enormous pressure. Jimmy Duggan and Rainer Haycraft added goals of their own, and the backline again held the Guelph forwards scoreless. By the time the final siren sounded the Dingos were up by 64-points, good for their third straight 10+ goal win.

Best on ground honours went to Everett Wells for his strong game in the ruck, and Tom Evans who was all over the field in a dominant display.