Results - Round 17 - Past Players Day 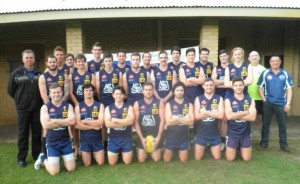 A massive turnout for Past Players Day saw the Blues take 4 from 4, with the League side ensuring the club another year in B Grade, the Colts all but locking away a double chance and the Reserves and Thirds edging closer to finals berths.

The equation was simple for the League team going into the weekend's match - beat the 9th placed High Wycombe and the club would be ensured of a spot in B Grade for 2014.  With a great crowd on the hill for Past Players Day looking on, the Blues kicked 5 goals to 1 in the opening term and never looked back, accounting for the Bulldogs by 39 points and consigning High Wycombe to relegation.

John Lee capped off a wonderful day by booting 4 goals to take his personal tally to 7 on the day, while Sean Halton and Kyle Wheeler chipped in with 3 goals apiece to ensure that 200 gamer Todd Grace would celebrate his milestone game in style.

The Reserves side continued their late charge at a place in the top 5 with a 62 point drubbing of High Wycombe.  The Blues led at every change, however they turned on the gas in the third quarter, turning a 21 point half time lead into a 52 point margin at the final change.

Full forward Hadyn Sleeman was the best of the goal kickers, booting 3 majors.

The Colts side, already assured of a finals berth, took a while to get going in the early game but did enough to dispatch of the 7th placed High Wycombe by 24 points.

Like the Reserves, the Thirds are also making a late charge for the final 5 and did their finals chances absolutely no harm with a 114 point belting of the 4th placed Kingsley.  Like the other 3 teams, the Thirds led from go to woah in their must win match up to keep pace with the 5th placed North Beach, who still sit a game ahead of the Blues for the final top 5 spot.

Jeremy Bruse booted a lazy 5 goals, while captain Ray Reveley warmed up the chopper with 4 majors of his own.  Simon Lawson and Brendan Miley were also handy contributors, bagging 3 goals each.