Taylor Receives National Recognition with Appointment to the WNBL Panel 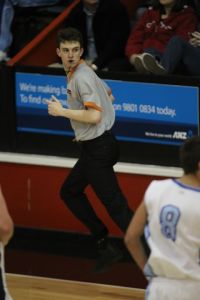 His constant success has seen him receive recognition from the National Panel selectors and, in turn, it has now presented him with an opportunity to progress further as an official after being selected to referee on the WNBL Panel.

Jack has been a prominent face in the Basketball ACT scene for a number of years now whether it be as a coach, a player, a referee, competitions manager and more recently the ACT Referee’s Director. People across the Nation’s capital have become accustom to his smiling face and hard work that he puts in both on and off the court.

Jack is a true advocate of the old cliché ‘hard work pays off’. Where ever Jack had the chance to be involved in WNBL pre games and post games he would always take the opportunity to learn. Even to the lengths of travelling to Wollongong to be a part of the NBL pre and post games with the officials. Taking in everything that was said and watching and learning the way the referees perform on the court has helped Jack to progress and transform into one of Australia’s elite officials.

“I am happy and grateful that I have been given the opportunity to perform on the WNBL,” he said after receiving the phone call to inform him of his appointment “I can’t wait to get out on the court and challenge myself with the next steps of my refereeing journey.”

The fact that the ACT are now receiving national recognition with their officials proves the fantastic standard that is constantly being produced in the ACT by our officials.

Basketball ACT, and in particular the entire refereeing community, want to congratulate Jack on his appointment as a WNBL Official and we wish him all the best in his journey as an elite official.