FINALS Review - Week One | Under 19 Netball 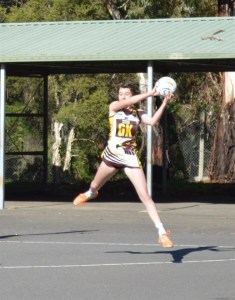 Our 19’s girls had an impressive Elimination Final victory winning by 18 goals against Riddells Creek 38-20.

The teams went goal-for-goal in the opening couple of minutes as the girls settled into the game.

Our Hawks girls then kicked into a higher gear and created some early turnovers to forge ahead.

Macca and Gracie were creating plenty of midcourt pressure off the Riddell centre pass and Shae and Abbey were intercepting every time the ball came into the defensive end.

We were up 10-3 at quarter time and extended this to 20-10 at half time. Our full court pressure was relentless which created plenty of turnover ball and our combination of Amy, Sarah and Gemma in our attacking end, made sure that our conversion to goal was exceptionally high from those turnovers. This rewards every player on court.

Even though the game was in hand the team continued to dominate in the second half, determined to keep the intensity high as some positional changes occurred. Emma and Jess hit the court ready to go and although Riddell threw everything they had at the girls, our young Hawks kept adjusting and maintained their focus as they extended their lead at every break.

This was a huge team effort, with every single player, putting an extremely high standard of netball out on the court. Everyone played their role extraordinarily well.

Abbey was enormous in the defensive end, and as our captain, set the standard extremely high right from the first whistle. Her pressure and intensity at the ball was sublime working with Shae to create a very high number of turnovers.

Sarah was sensational in the attacking end, working with Amy to move the ball quickly into the shooting ring and creating plenty of great ball for Gemma close to the post.

Macca was a powerhouse through the centre court, creating great pressure on the ball and opening up the court with strong powerful drives into our attacking end.

With this result, we have been rewarded with a double chance and the opportunity to play Rupo this week for a chance to head straight into the grandfinal.

With the standard of netball our girls are playing at the moment, this is very achievable and playing at Clarke Oval with the 19.5’s footy boys with no canteen or bbq to organise, we hope to have a big vocal crowd to cheer us on. We can do this girls!

Well done to our 19.5 and Reserves footy boys for their wins to make it 3 out of 3 for our club, a sensational day out!! Go Hawkers!!!

See more photos from the day via our FACEBOOK PAGE