ROUND 18 REVIEW | A Grade Netball 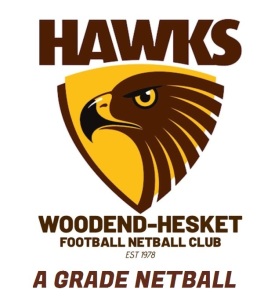 The final game of the 2019 season was also the final netball game of the day at GG oval beginning at 2.45pm against Wallan, a twilight round also bringing awareness to mental wellbeing.

For the A grade Woodend team, all players that were selected were available to play. Inside this team, there is four U/19 players who had already played a close game earlier in the day. Having briefed the team on Wallan’s style of game, the players stepped onto the court ready to play their personal high standard inside a strong team performance.

Tara Burnip over the season has improved and evolved as a player, during the season she has also played out as GA, however for the opening quarter, Tara was positioned in GS to maximise her height and positioning near the post to score goals. Maddy Staresina having had her first baby mid January, has worked hard all season in regaining her fitness, shooting accuracy in addition to the new life and the demands of being a first time mother.

I wish to acknowledge her tenacity on the court, always trying to make attacking play. Gracie Reid has been a strong contributor throughout the season in the A grade team. Being one of the U/19 players, her work load has been high on game day. She never complained and has worked hard in the WA position, learning how to play her attacking game against extremely athletic defenders. In the opening quarter she settled into the WA position.

Shannon knew that in each game she was against WA players that would have compact set of skills, the knowledge how and when to use them and speed to complete the package. Shannon being the Captain in addition was responsible for the team warmup on game day.

Abbey Glassey also another one of the U/19 players has had a high work load all season in GD. Yes at times she was placed in GK, however the job requirements of GD was demanding in the ring and in attacking play required her to be the driving force down court, being available for reset play with Shannon if in the attacking end space for leads and passes was not present.
Partnered up with Abbey in the circle was our Vice Captain Ally Watkins. Ally has really settled into this position throughout the season. Both Ally and Abbey have further developed an understanding of their defending marriage and their success has contributed to the ball being sent down into the attack many times over in each game played. Ally has remained focused on her immediate job, which has kept her in play and also has allowed her to successfully intercept balls outside the ring.

Macca Brown, another U/19 player has been played in Centre and WD. Macca’s speed and ability to read the play has enabled her to intercept the long pass our opponents have chosen to throw near her. With this ability it has always lifted the spirits of the entire team and supporters.

Shae Denahy is our final U/19 player who has been playing in the A team. However part of the season she was redeployed into our B team due to injuries of the B grade defenders and this was a beneficial move. Shae was able to play senior netball against shooters who were not as fast or as complex as the A grade shooters.

However, when she was listed in the A team as GD or GK, Shae showcased the additional skills she had acquired and was more dynamic in defence and was no longer intimidated by the A grade shooters.
For the opening quarter of this Wallan game, Shae took the GK position, with Abbey out as GD.

This game against Wallan, who was sitting third on the ladder was about Woodend-Hesket bringing together their skill set, and team play.

Woodend came out strong, leads and placement of passes connected and goals were scored. With instructions not to play a high game as that was Wallan’s strength, Woodend worked the ball around with second effort leads, resets back to the mid court transverse line, Shannon and Abbey were available.

Feeding into our shooters was difficult for both the feeder and the shooters, however success was achieved.
Brittany and Gracie did get on to the circle, however the tall, athletic defenders with skilled footwork were able to intercept the soft passes. Our Woodend team had evolved and were playing structure netball.

In our backline, Abbey and Shae were up for the challenge and after the first quarter, they were instructed to lift their work load, Abbey. to do the hard work outside the circle and hold up the GA. With Shannon also holding up the WA, Wallan’s options for leads did get shut off.

As the WA was slightly taller player, Shae was able to match her and apply pressure on the pass. Ally Watkins came on as GK. This increased our defending height. In the final quarter, Gracie was rested and Brittany came in to WA and Shannon came back into WD, with Shae being rested also.

Tara came out to GA and Maddy went back in GS. With Tara running out like a gazelle and Maddy playing smart against a solid defender, this change did cause confusion to Wallan’s defenders. Brittany and Macca settled in very quickly and continued working the ball around to find that much need space for passes. In the backline, Shannon, Abbey and Ally kept trying different defending options to slow down Wallan.

With the final whistle being blown for the end of the game and season for Woodend, Wallan took the win. This game was well played by both teams and even though all the players kept working hard in defence and attack, it was the error rate and missed shots that contributed to Woodend not getting a win.

Our Woodend A grade team finished eighth position for the 2019 season, one position outside finals.
This is a higher position than the previous season. With four wins and a draw this team has improved in so many levels in such a strong grade of talented athletes.

I am proud of these players. It has been an interesting season and at times life has gotten in the way of training yet they kept their head up on game days against the stronger teams and have performed extremely well when they knew a win was possible.

These players always showed great sportsmanship even if the opponent failed to at times. John McGrath’s quote comes to mind when I think about the 2019 Woodend A grade team, “ a champion team will always beat a team of champions”. The heart of a team can create magic and these players have done that and will do it again in the future.

Well done ladies, the season has gone too fast. Keep your fitness up, practice those goals and before you know it 2020 season will be at your heels. Go Hawks