ROUND 18 REVIEW | B Grade Netball 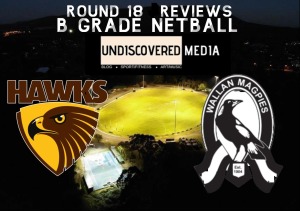 With the winter sun shining, the GG oval and netball courts was a perfect picture to host the final game of the 2019 season. With all B grade players that were originally selected available to play, a united team stepped onto the court.

As coach of the team, prior to their warm up, I presented the players their team and individual goals that they the players wrote down back in March.  They were able to personally critique what they had achieved and this set them up for a solid performance against Wallan.

With sixteen games played together, Emily Lindner has been a solid performer in GS. Captain Bonnie Thorsen has spent the season playing both ends, however for this particular game, Bonnie took the GA position.

Chelsea Alcaraz has been a consistent mid court player and opened the game into WA. In the centre, Vice Captain Taylor Bowen took this position. Throughout this season, she has also played in defence, this has directly helped her performance in Centre. Tegan Finch having now played her first season in the B grade has also played a pivotal part in our defensive backline, tagging the fastest player on the court in WD. In the circle, two players that have been unavailable at times due to injuries or career commitments came together.

Mel Wilson took up the GK position, her two previous games show cased her ability to read the play, hold the three feet in an impressive dominant stance. Claire Klusik took the GD position and in addition to her physical strength, rebounding missed shots, verbal communication and situational awareness, Claire also is a major influencer of the team mindset on court.

Rylee Koutras who is new to the club has had an interesting season. An injury earlier in the season, delayed her being played on game day, however as the season progressed, her skill set increased and so did her awareness of the type of attacking game Woodend played. Rylee has been bringing a short, fast, smart game either in the GA or WA position when taking the court.

With the line up set, Woodend matched Wallan in the opening minutes of the first quarter. As predicted, Wallan presented the mid court press.

This style of defence was the last topic of discussion held before the team stepped onto the court. My Woodend team did me proud and broke it immediately and scored a goal. Wallan  would never present it again for the rest of the game. Job done!

Emily and Bonnie were moving well in the circle, however, placement of passes into them wasn’t clean. In the mid court, Tegan, Claire and Taylor began working the ball around, playing smart, while in the circle, Claire and Mel went to work. At the end of the first quarter, Woodend only lost it by seven.

In the second quarter, it took Wallan a minute and a half to score their first goal. Our overall defence was working, continually gaining possession of the ball due to all players defending. Emily taking her strong three feet whenever throw ins occurred. Bonnie tagged her GD that would drive down court. Chelsea also holding up the WD. Defence always starts with the shooters. We went down by six goals in the second quarter.

The overall play was getting better, feeding into the shooters had an increase success rate. This was due to both Emily and Bonnie increasing their speed of their leads, strength of their lead and timing of leads.

Entering the third quarter, Chelsea was rested and Rylee came on as WA. With her speed, low game of bounce passes and her ability to position herself in front and on the circle, both Emily and Bonnie were positioning closer to the post and goals were going in.

In the backline, Claire and Mel adjusted to the umpires long three feet. This kept them in play and this effected Wallan’s ability to feed into the circle, positioning of shooters and score goals. In the mid court, Tegan was given a fresh WA, this is always a compliment, she had beaten her last opponent and now Tegan had the job of tagging and preventing this WA from playing her game. At the end of the third quarter Woodend drew with Wallan, eight goals a piece!

Entering the final quarter, Wallan’s error rate that had been slowly increasing throughout the last three quarters and this style of play continued. Woodend’s  determination not to settle on their individual performance and as a team was a major contributing factor. Wallan was getting tired.

They had scored twelve goals the first quarter, ten in the second, eight in the third and by final siren six!  Woodend’s defence had become more dominant, however even though the backline defenders and mid court players presented the ball into the shooters, at the end of the game, it was the missed shots that caused Wallan to take the win.

I am extremely proud of this performance. The Woodend B grade team did not lose face by this loss. It was a clean game with well timed leads, good vision of looking for alternative lead options. In defence, even though the players knew that they are going to be penalised, our players remained focus on their job and their confidence grew.

Yes errors were made, goals were missed, however this is what I know about my B grade team - This performance showcased a strong foundation for the 2020 season.

With core fitness maintained over the next five months and for those players that are still playing elsewhere, if they implement the skills learnt here at Woodend, when they begin the new season they collectively will start stronger. Their goal was to win four games for the season, they won three. With this group of players, I know there are teams we have lost to this year, however 2020  will be a new season.

To all the Woodend  B grade 2019 players, I ask you, what are you going to do to help yourself and your 2020 team’s performance?  Go Hawks