ROUND 16 REVIEWS | A Grade Netball 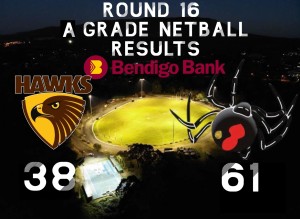 After a strong performance the previous round against Lancefield, Maddy and Sarah continued their working relationship in the shooting circle for the Hawks. In the mid court, Gracie playing WA settled in quickly, with Brittany running centre and Shannon tagging the dominating Romsey WA. In the defending circle, Abbey and Ally would have a high workload due to the height and size of Romsey’s shooters.

During the first quarter, both teams were sorting out the strength and weaknesses of their opponent. Within the opening minutes of this game, we played smart, with well time leads in attack and defending strategies put into play to slow down Romsey.

Emily Lindner made her debut in the A grade team, coming on as GS within this quarter. Having already played her B grade game, she handled the strong Romsey defenders inside the circle and contributed with goals being scored. Well placed passes brought the ball down the court, however at times, with Romsey applying the physical pressure on every lead, errors crept into our attacking play and leads and passes didn’t connect.

Going into the second quarter, Romsey who was in the lead by seven changed their line up. Maddy returned to the GS position and was matched up with a new GK who had height and size. As this quarter began, it became very clear the long passes we enjoy playing would make the Romsey GK look good by intercepting the ball.

This didn’t last long as the extremely fast play of Maddy, Sarah, Gracie and Brittany out played her. In the backline, Macca came on as WD, she was to tag a new WA. This was a perfect match up as both Macca and the WA were extremely fast and by half time, both players had success against each other. In the backline, Abbey and Ally were tipping, deflecting balls away and sending the ball down court into the attacking end.

By the closing minutes of this quarter, Woodend’s performance improved, only losing that quarter by five. However, Romsey with their high scoring of goals had pulled away and were in the lead by twelve.

Entering the third quarter, Macca was moved into the centre position to keep tagging the Romsey WA who also had been moved into C. Shannon came back on as WD due to the opening WA returning to court.

Shannon did an outstanding job, as this WA had to work hard to achieve the leads she was required to make. Abbey and Ally had a new shooter to try and shut down. Both these players were continually so close to intercepting and deflecting the ball. Success was achieved, however, the internal placement of passes and well positioning of the other shooter made it a tireless job. To Abbey and Ally's credit, they remained focused on the job and kept persevering.

Romsey won that quarter by seven.

Going into the last quarter, Romsey made a couple of more positional changes in the mid court. For Woodend, we knew our mid court players matched them. Gracie having played a fast pace game was rested and so was Sarah. Brittany came into WA, while Maddy came out as GA and Emily returned to GS.

The time off the court, gave Emily a chance to talk about her experience in the first quarter. As a result of this discussion, Emily made stronger, faster leads. She kept moving and with the extra height Emily has, her and Maddy worked well in the circle.

The interchanges that took place throughout this game was smooth. The settling into a new player on the court seems to be taking less time. Woodend only went down in the final quarter by four, with Romsey taking the win and continuing their journey to finals.

For Woodend-Hesket, the overall game was a game played with a calm mindset. The A grade Woodend team used to be intimidated by Romsey, but not in this game. Yes basic errors were made, due to over thinking or not concentrating on the job at hand. However, each player remained committed to playing this Romsey game as a team and each player tried their best.

I am proud of this group of young ladies. It’s been an interesting season, with life getting in the way of training at times, however, when these players come together, they are very much a great team on and off the court supporting all. Go Hawks!