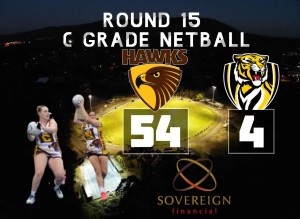 The team was focused on playing four consistent quarters of netball, with the aim to score as many goals as possible and restrict Lancefield to give a much needed percentage boost.

With Louise Marendaz back in the side, we were able to move players around in attack and defence and try some different combinations. At full strength, the C grade team is a strong and flexible unit.

The game also allowed the team to go back to basics and implement set plays and put into place skills that had been practised at training. Most pleasing was that the team pushed themselves in the last quarter to secure our highest score of the season.
In games like this it’s hard to choose the best players as everyone played their role really well and played together as a team. The following players performed consistently well over the four quarters.

Louise Marendaz slotted back into the team beautifully, playing in goals and also a quarter in defence. Lou is such a strong player who also provides positive energy, our team is at its best when she is playing.

Paige Mitchener has been performing consistently well over the last few weeks. Paige brings speed and pressure in the mid court and has become a very versatile player. Our captain Chloe Finch played her best game for the season, with strong feeds in to the ring and continual support for her team mates.
As we sit fifth on the ladder by percentage, C grade need to focus for the remainder of the season and win as many games as possible to ensure our spot in the finals.

With Wallan and Broadford breathing down our necks it’s going to be close. Continuing to play as a team, training hard and focusing on what they can control will see the team in with every chance of playing finals. Go Hawks!