ROUND 15 PREVIEWS | B Grade Netball 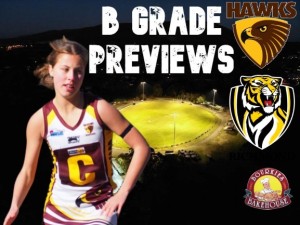 Talking point
With two byes and twelve games under their belt for the 2019 season, the Woodend-Hesket B Grade team will recall the skills learnt and implement them into the game as a strong united team.

Previous round
Woodend/Hesket: Even though Macedon took the win, the Hawks played a thinking game by moving the ball around with short sharp leads and passes to match. Team work and concentrating on their immediate job was seen.
Lancefield: Romsey took the win against Lancefield by 62 goals. Final score 14/76. Prior to this game they had a draw, with their game against Diggers Rest during round thirteen, they only lost by 25.

Who is going to win?  This is going to be a good game. Both teams wanting to get another win on the board. In the end Woodend-Hesket will take the win home to the clubrooms, with a smart thinking game in attack, strong defence all over the court, and pressure in the defensive circle.