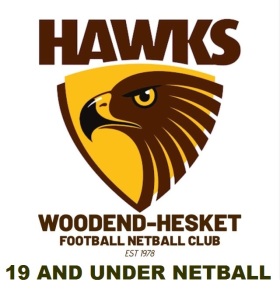 The 19s team came out on top in another tight, physical battle against local rivals Macedon Cats, winning 27-25.

The young Hawks were in trouble early as they struggled to find rhythm throughout the court. This led to turnovers and easy conversion to goal against them.

At the other end, Woodend/Hesket's shooters were finding it difficult to find space in the ring and the Cats capitalized on its errors. The Hawks trailed by as much as 10 goals late in the first quarter and it wasn’t looking pretty.

A few firm words were spoken at the first break as the girls knew that this was not the style of game that they want to put out there.

The defenders were asked to step up and make it difficult for the shooters to get access to the ball and the mid-court defense were asked to slow down the Cats' ball entry and stop the WA from hitting the circle edge so easily.

Macca and Gracie really stood up in the middle as they applied pressure, while Abbey and Shae started to find their mojo and kick into top gear in the defensive end.

The Hawks were still struggling to get the ball into their goal ring, however, an early second quarter injury time allowed them to make some changes and switch Sarah from centre into the GA position, Emma into the WA position and Gracie into centre.

The Hawks were forced to switch Macca into GD due to Shae needing to leave the court. This wasn’t for long and Macca did a great job of giving the Cats ring feeders something else to think about.

The girls started to really push and show signs that they could get up.

It had halved deficit to five goals at the half-time break and confidence was growing.

The line-up was working, and the girls had belief. They just needed to keep pushing.

The team kept at it in the third quarter and although they were still down at the final break, this was only by three-goals and knew a win was doable.

Woodend/Hesket knew that it only needed to turn the ball over a couple of times and convert turnover ball opportunities when they presented and holding its centre pass.

There were no changes to the lineup, and the Hawks went into the last quarter pumped up and ready to go. This talented team not only turned the ball over early, they continued to do it throughout the entire quarter. The crowd was massive, and the number of Hawks supporters far outnumbered the Cats which helped lift the girls.

The support the girls get from the footballers for their big clashes is amazing!  The crowd was loud and proud as the girls continued to dominate the last quarter, scoring eight goals to three.

Woodend/Hesket may have lost the first quarter convincingly, but to the girl’s credit, they were able to regroup and win the next three to take out the game with a big two-goal win!

The whole team enabled this win. Sarah Duff had a fantastic game, creating the much-needed space in the goal ring and creatively feeding the ball to Gemma, in addition to pushing up the court to apply pressure and drive. Gracie Reid was on fire in the midcourt, driving the ball down the court and applying pressure to force the turnovers and Gemma Baird was strong once again in at goal shooter, scoring 24 of 27 goals!

This game has given us great confidence and the knowledge that we can pull together and achieve great things together with positive mindsets and belief in one another. Well done girls on such an exciting win.  Go Hawks!