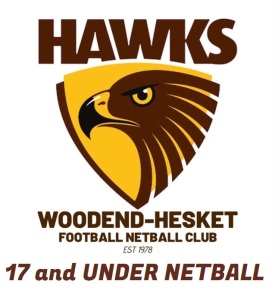 The 17s team surged ahead in the second half after some early pressure on the weekend, defeating Rupo 39-25.

With Woodend's tall defender out with an ankle injury, it knew that it might take a while for the team to adjust to the new line up given that its key wing defender would have to play in the ring.

The Rupo GD applied plenty of pressure early, making it difficult to get the ball into the ring and slowing down Woodend's attack end.

The Hawks found themselves with only a three-goal break at half time and needed to lift.

An adjustment was made with Madi Kleiner moving into centre and Sarah Duff into goal attack with Emma Cogger and Amy Duff taking up the wing positions.

This proved to be the answer with the team kicking into gear and piling on 10 goals to five in the third quarter and 12 goals to six in the last to win by 14.

Mikayla Tunley did an enormous job in the GK position, applying plenty of pressure and teaming up with Alice MacDonald-Myers, turned over plenty of ball.

Sarah Duff was instrumental in the GA position, doing a power of work out the front and continuing to feed the ball beautifully to Gemma Baird, while Gemma, scored heavily, shooting 32 of our 39 goals with a high 90-percent accuracy.

The team remain undefeated and on top of the ladder with only one game remaining before finals.  Go Hawks!