ROUND 14 PREVIEWS | 19 and Under Netball 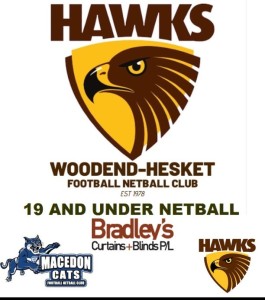 Talking point
Macedon – The Cats are sitting fourth on the ladder, just one position below the Hawks. There is only six points separating first through to the fourth position on the ladder and so this is a must win for the Cats as they aim to take the double chance in finals away from the Hawks.

Woodend-Hesket - Currently sitting third on the ladder, the young Hawks are very keen to hold on to a top three finish come season end. With their full team back in for the first time in a month and coming off a bye, the Hawks girls will be looking to beat the Cats as they did in the first round.

Last week
Macedon –  Beat sixth place Riddells Creek by 12-goals. Shooting at only 64-percent, the Cats will need to step it up in goals if they want to beat the Hawks this week.

Woodend-Hesket – the Hawks had a club bye and a handy break over the mid year school holidays. Their game the week before was a comfortable 15-goal win against fifth placed Melton Centrals with an undermanned Hawks team. Amy & Gracie were instrumental in the mid-court and Abbey strong in defence. Most pleasing was the strength of the two 17/u girls that played up to fill gaps, they didn’t look out of place, both playing strong games and a great sign for the future.

Why they will win
Macedon – the Cats will be hungry for a win against the Hawks outfit to level the scorecard heading into finals.  They only lost by three-goals in the first round against the Hawks and with strong recent performances they are in form and could upset the Hawks.

Woodend-Hesket – This team will be determined to repeat their first round result against the Cats and take confidence into finals. With their key goal shooter back in, the fast midcourters will relish having a combination of a tall and a quick back in the ring to feed the ball to.

Who will win
Woodend-Hesket!
With a full team back in after a rough month of unavailabilities the young Hawks will be at full throttle and eager to finish the home and away season with a number of solid wins. Their relentless full court defence and accurate shooting will get them over the line.