ROUND 12 REVIEWS | A Grade Netball 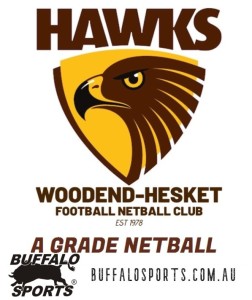 With a home ground advantage for the Round 12 game against Melton Central and Ladies Day also being held at the completion of the game, the A Grade team went into this game working towards a win. Both teams fought out a draw in its last meeting in Round 3.

With a hard and fast game the previous week, Woodend/Hesket were to create space for leads and passes to connect.

This was based on the knowledge that Melton Central was not as fast as Rupo, however Melton Centrals' defence, with calculated positioning created doubt of visual space in our attacking end.

Emma and Maddy in the shooting circle were unable to position themselves continually to successfully score goals.

In the mid-court, Gracie and Brittany struggled to connect timing of leads and passes. In defence, Shannon, Ally and Abbey worked hard, counteracting Centrals' set plays and intercepting the ball, however scores came on the board for them very quickly as they took advantage of our errors.

Centrals led by nine-goals at quarter-time.

Ally was moved into GS to create height in the shooting circle, while in the centre court, Gracie was moved to WD as she had the same speed of the youthful WA and for the remaining of the game, tagged her and made her work extremely hard.

Gracie was either intercepting balls or chasing it down and turning it around into an attacking play. Shae Denahy moved into GD after a stellar effort in B Grade this season. This helped as her strength enabled her to match the physically strong GA.

Chelsie played her first game in A’s this year coming on as WA in the second quarter which had her work the ball onto the circle, finishing off the passages of play with well executed passes into Ally and Maddy.

By half time Woodend had won that quarter by one goal. The team was improving and progressing, however, the overall score had Centrals up by eight.

In the third quarter, Centrals brought on their very fast and accurate GS. Shannon was placed on her as GK. The remaining line up stayed the same and with scores being made on the board, at the end, Centrals won that quarter by one.

This cat and mouse game continued into the final quarter. However we made one more change that had Emma come back on as WA. This gave us a chance to see Emma play in this position. She contributed with well time leads and also feeding off the circle into our shooters.

However it was Centrals' ability to bring on a tall and solid shooter that was fed the ball under the post that did the most damage. No matter how clever Shae and Abbey worked, they were out played.
Melton won the quarter by six and took the game.

We enjoy playing Centrals. They show great sportsmanship on and off the court and it is always a good game. This dance will continue, as we here in Woodend work away developing strength in errors of our play.

With Tara still unavailable, the A Grade team is trying to reposition players in new playing positions that will still maintain strength, speed and momentum. All players are willing to assist and support this direction. The support for each other on and off the court make us stronger in other areas of our lives.

A special mention to Mel Wilson who organised a lovely Ladies Day lunch, what a delightful afternoon.
Until our next game, go Hawks.