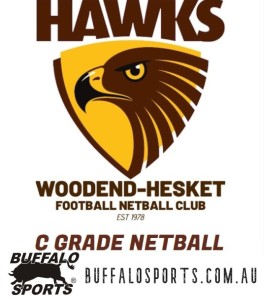 Woodend/Hesket unfortunately went down to Melton Centrals 17-35 in a game where it was still in the contest with a few minutes to go in the third quarter before Melton ran away with the win in the last quarter.

The team started really well in the first quarter as young Madi Kleiner teamed up with Alex in goals and the score was 9-10 at quarter time. With a couple of players out, Madi helped us out having already played in the 19/U side, she worked hard all game.

Our defensive pressure was good all game, however we were let down by not being able to perform effectively and consistently the basics of the game.

Our passing at times was poor and put the receiver under pressure and at times we were caught flat footed waiting for the ball as a Centrals player intercepted it.

All of these skills are able to be improved and it’s what we will need to focus on in the coming weeks.
Paige Mitchener had her best game for the season playing in WD. She tagged her player, applied pressure, took intercepts and backed up through the mid-court. It was great to see her play such a good game.

Sarah Smith again worked hard in defence, taking up the space in the ring and defending well. Kyra Kirkpatrick was switched into defence due to the unavailability of others and despite playing on a much bigger opponent made sure the GS had to work hard for all of her shots.
The loss has the team drop to sixth and we will need to make sure we re-focus at training and bring the consistent, four quarter effort that I know the team can bring. Keep working hard everyone, the rewards will come. Go Hawks!