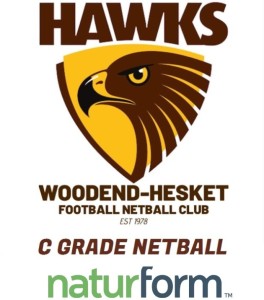 Woodend/Hesket came away with a stunning 27-26 win against Rupo, the first win for any Hawks netball team against probably the strongest club in the league for netball.

When the final whistle blew, the scoreboard showed a draw however the scorers said it was wrong and the Hawks had won by a goal!

It was an incredible game. The team played inspired netball, never giving up, forging ahead in the third quarter and remaining calm under pressure in the last. Trailing by three-goals and in unfamiliar territory, Rupo bought new players onto the court.

Woodend/Hesket won because it played as a team and everyone played their role. It had nothing to lose and quietly knew that if it played its game then it would perform well. As a coach I could see something different in the girls, they really wanted to win and they were able to maintain their intensity and pressure in every quarter. This was by far our best game for the season and showed that anything is possible.

Our goalers were outstanding, calm under relentless pressure from the Rupo defence and the extremely loud Rupo supporter base.  Lou, Jazz and Alex missed only two shots between them for the game and gave the defenders and mid-courters confidence that they would score from their hard work.

Courtney, Chloe, Paige, Hannah and Kyra created space in the mid court, patiently fed the ball into the goals and tagged their opposition. They worked their way through the Rupo press playing a short game.

Sarah, Mon and Lou worked so hard in defence, applying pressure to the Rupo goalers and bringing in rebounds and tips which they were able to convert into goals.

In a game like this, it’s really hard to pick the best players as everyone did such a fantastic job. When it came down to it, Jazz Gardner was brilliant in GA where she kept working hard, creating space in the ring and accurately shooting.

Courtney Arthurson is playing superb netball, she has become our go to feeder into goals and brings an air of calm to the team. Sarah Smith also played superbly in defence, being assertive and determined, the better teams bring out the best in her.

The game will go down as one of the best I have been involved in at Woodend and hopefully gives the team confidence and belief for the rest of the season. I was extremely proud of the sportsmanship our team displayed and the way they went about their game. Be proud of yourselves girls, I know the club is.

Let’s maintain our focus and energy and see how far we can go this year. Go Hawks!