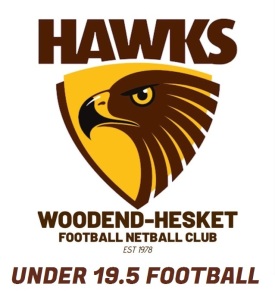 Talking Points
Rupertswood - a flawless start to the season. The reigning premiers have been the bench-mark in 2019 again after an impressive premiership win in 2018. Averages more than 15 goals per game.
Woodend/Hesket - last weekend was the game that got away. The match against Diggers Rest in front of a strong local crowd in a stand-alone game was the ideal opportunity to seal a place in the top two heading into Round 11. Now it runs the risk of missing final with Diggers Rest and Wallan looming around the edges of the top four.

Form
Rupertswood - simply flawless. Led Riddell all the way in its last encounter prior to the bye with a solid 29-point win. This was as close as any team has got to them this year.
Woodend/Hesket - has lost three of its last four matches after a solid start to the season. The loss to Wallan really hurt four weeks ago that started the trend. Must bounce back to form.

Why they will win
Rupertswood - it is clearly the best team in the competition. Jacob Chahine is a star up forward. Has 25 goals for the season and Alex Misiti is outstanding in the midfield. He is a terrific leader. Look out for Mitch Johnston who is a crafty goal sneak with a good head on his shoulders.
Woodend/Hesket - it needs to get back to basics and play its exciting brand of football on its own terms for longer. There is potential in the midfield and it needs to build on that. Kranjec was outstanding last week with four goals while Zioolkowski was elite.

Why they will lose
Rupertswood - coming off a bye against a genuine premiership threat will be a big test for them. The Hawks average seven-goals a game kicked against them in defense, a big difference on this team's average of 15-goals.
Woodend/Hesket - anyone will have trouble against Rupertswood. Riddell pushed to within five-goals after a slow start, and the Hawks are a similar side talent-wise.

Who will win
Rupertswood will be too strong. The Hawks need to dig deep and push to within five-goals at least.