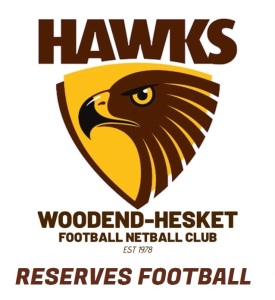 Talking Points
Rupertswood - with a lot of 18/19s premiership players in this team, who will step up in such a crucial game and arguably its biggest challenge in a month?
Woodend/Hesket - solid wins over Broadford and Rockbank in recent weeks to get its confidence back on track has been handy but how will that carry through against a genuine premiership threat?

Form
Rupertswood - after losing two of its first four games of the season, it has been oustanding with wins over Rockbank, Centrals, Riddell (albeit abandoned in third term), Lancefield and Romsey to carry a five-game winning streak. It has lost to power-house teams Diggers Rest and Wallan in convincing fashion.
Woodend/Hesket - it has recovered with two impressive wins after losing to Riddell, Wallan and Diggers Rest. It did have chances to win in all three losses against quality opposition after winning the opening four matches of the season.

Why they will win
Rupertswood - Jayden Ballie kicked four goals in his last outing and Connor Barrett was outstanding. This team has a lot of solid runners that will cause headaches for the Hawk midfield.
Woodend/Hesket - Found avenues to goal last week with the returning Josh Smerdon, and Max Ambler and Keiran Haddad combining for 21 goals, if this forward line runs out again together, this will trump its opponent's backline with strong marking and crumbing goal awareness.

Why they will lose
Rupertswood - its backline could struggle against a strong forward line that has been very active with strong goal hauls in recent weeks.
Woodend/Hesket - it's always a bit of the unknown when a team that has struggled with form, returns with two dynamic wins against teams that are down the bottom end of the ladder. Rupertswood has strong runners and will take some beating. Shaun Crawford is a big gun to watch.

Who will win
This is a real toss of the coin game. Rupertswood has been the better of the pair in match-ups in the past and is tough to beat at home. They'll win by 13-points. It is a game that will define Woodend/Hesket's season as it tries to build momentum and be a genuine threat. If it pushes the margin inside three-goals, it's a great sign. A win for the Hawks will have it move from fifth to fourth above Rupertswood.