IN THE PRESS | Woodend-Hesket Masters footballers off to European tour 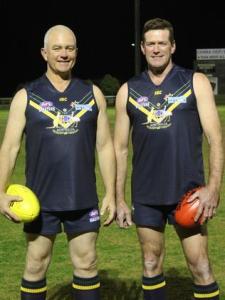 WOODEND-HESKET footballers Anthony Woodcock and Glenn Mangan will be flying the flag for Victoria Country in Europe next week.

The footballers are part of the AFL Masters Australia team touring overseas, where they will take on representative teams of France and England in Australian rules matches, and Ireland in an International rules match.

The tour will also include “friendlies” against teams such as Oxford and Galway.

Woodcock retired from football when he was 23, then “25 years later I took up Masters footy”.

“I was playing cricket and it was taking a toll on the family in terms of being away for 10 hours of the day,” Woodcock said. “I gave up that and decided I needed another team sport, so took up footy again because that’s two or three hours a day.”

For the past three years, Woodcock has also represented the Victoria Country Masters team at the annual AFL Masters National Carnival, and was captain of the over 40s team for the past two .

This was the first time he nominated for an international tour. Players had to be aged 40 or older this year to be selected.

Another five players in the squad are from Victoria Metro.

The former wicketkeeper may also have his old skills put to the test — Woodcock is one of three possible goalkeepers for the International rules matches.