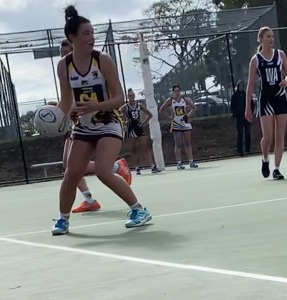 
Chris Yeend: Congratulations on making your recent A Grade netball debut, how did you first hear that you were going to debut and what was your reaction?
Emma Cogger: Thanks Chris. I first heard about making my debut by Kellie as she pulled me off to the side after a training session before we played Wallan. She asked me if I was willing to step up and be apart of the A Grade team.
Honestly I got a very big shock but was very excited and thrilled that I was asked and was looking forward to a great opportunity.

CY: Did you get much of an opportunity to learn a bit about the Wallan team before heading into the game?
EG: Not much at all, I got the idea from playing Wallan first in the 19s that their A Grade side was going to be an even bigger challenge for me.

CY: What were you feeling on the morning of the game?
EG: I woke up feeling pretty confident and knowing this was going to be a good challenge for me, the nerves didn’t really hit until I started warming up with the A Grade team. The girls were really supportive which made me feel so much better stepping onto court.

CY: Did you feel like the preparation of playing 19s before hand helped you in the lead up to the A Grade game?
EG: Yes, the 19s match was a tough one and I knew that I was about to go into another, I was a bit overwhelmed from the previous game. I’m lucky to have had Wendy and Kellie both talk to me which made me think twice about what I needed to work on in preparation for A grade. It really did help.

CY: Goal Attack is a tough position and Wallan has a very talented back-court, how did you enjoy the game and what did you take out of the experience?
EG: I really enjoyed being on court and it was a good opportunity, the coaches and girls both on and off court gave me lots of encouragement which made me feel really great.
To be playing against older and more experienced women really gave me an insight about what A grade is like and what I need to do to hold my own in the higher levels.

CY: What do you see as your strengths as a player?
EG: I’m always ready and keen to take up new challenges, I think I communicate well with my team mates on the court

CY: Tell us about your netball background. Who did you play for as a junior, how did you start playing and what have been some of your special achievements?
EG: I first stared playing in a local competition at Romsey in 2014 then ended up playing in Kellie's (Duff) Under 13s team at Gisborne on a Saturday morning.

I started playing for the Hawks in 2016 with Kel as a top aged Under 13 player and have moved up the grades with them since and wouldn’t change a thing.

I played two years as an Under 15 player with the Sunbury representative team and competed at the Association Champs in 2018.

Some special achievements are, our Hawks 15 and Under team winning the Division 1 Premiership, being asked to move into the high performance program at Vic Uni netball academy and now, making my A Grade debut.

CY: Would you like to play more A Grade this year if opportunities present itself?
EG: I would love to.