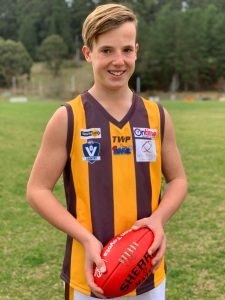 Woodend Junior Football Club player Willem Hanegraaf has been successful in being selected for the Victorian Under 12 Schoolboys Football team to play in the Australian Football Championships to be held in Mandurah from August 3 to 10.

Willem went through a five-week selection trial process where up to 1,000 players from several regions across the state came together to make the final squad of 23.
Willem did three-years of Auskick in Woodend, started playing Under 10’s as a 7 year old in 2014 and attends St. Ambrose Primary School in Woodend.
Congratulations Willem and good luck wearing the Big V.