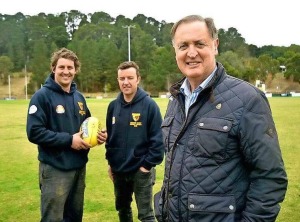 The Woodend Hesket Football and Netball Club (WHFNC) along with the Woodend RSL sub-branch would like to invite all Defence Force veterans, serving personnel, friends, families, and the wider community to a Veterans football match over Queens Birthday Weekend, Saturday 8th June 2019.

The game, an initiative of the sporting club is to acknowledge and celebrate the contribution of our defence personnel and their service to the nation, particularly those involved in recent conflicts and peace keeping operations, such as Somalia, Cambodia, Iraq, Timor Leste and Afghanistan.

The President of the Woodend RSL, Mr Peter Whitelaw, commented that this was a unique situation, in which a community group has by itself sought to recognise veterans, and reflects the celebration of military service by the wider community. He added that such initiatives provided an invaluable sense of community support and respect to veterans, many of whom are still struggling with the effects of their service.

Woodend Hesket Football Netball Club President Paul Podbury, stated ‘Our club is really proud to be working with the Woodend RSL and the Central Highlands
Vietnam Veterans Association to provide an event that will celebrate our
local defence personnel and their service to the nation in a local sporting
environment.’

The President of the Central Highlands Vietnam Veterans Association, Mr Ken Bryce, has congratulated the Club on this initiative, adding that this expression of community support for veterans will go a long way in assisting their rehabilitation and recovery. “This can only assist in creating a cohesive and caring community” Mr Bryce observed.

This initiative is also in the context of both the Federal and State governments seeking to recognise the service of and support and appreciation for, focusing on younger veterans..

It is hoped that this Veterans Day game, and recognition ceremony, becomes an annual feature on the Woodend calendar.

The inaugural Veterans Day game will be held between the WHFNC Hawks and the Riddell’s Creek Bombers, starting at 2pm on 8 June.

The match will be at the Gilbert Gordon oval, a short walk from the Woodend train station. Parking is available at the ground. Veterans may enter at no charge and also receive discounted food and drinks.