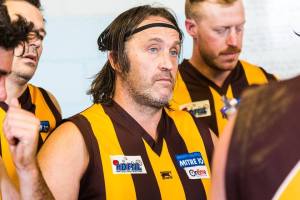 Talking Points
Woodend/Hesket - Missed a golden opportunity to take down the premiership favourites on the weekend. It has dropped its only two games of the season to last year's Grand Finalists in the last two weeks, and been in threatening positions in both games. It is a threat and genuine contender this year.
Riddell - Jarryd Gardiner is okay after his match ending injury in the third quarter last week against Rupertswood. Gardiner's fall after a strong mark resulted in the game being abandoned with the Sharks 27-points clear. The result of the match was some-what irrelevant, as long as he was healthy.

Form
Woodend/Hesket - Consecutive losses against the reigning Grand Finalists hurt and knows that it had a chance to take down Wallan on the weekend. It led at the opening two terms and trailed by a point at three-quarter time before going down by two goals. Gutsy effort and signs of being a premiership contender are evident, even without coach Liam O'Meara in the second half due to injury.
Riddell - Has split its results to start the season and has a fair bit of talent on its list with premiership experience. Will play finals in 2019 and will be hard to beat in this game.

Why they will win
Woodend/Hesket - Quality midfield with enough smaller players who can kick goals. Matt Perkins and Luke Bourke have been in fine touch this year and Chris Scobell has improved dramatically. The depth is good and the scoreboard will take care of itself.
Riddell - Rhys Lowry, Lachy Henson and Ricky Elliott are just three star players who know what it's like to be in successful teams. They add invaluable experiece in the midfield and up forward, and capable of leading their team to victory.

Who will win
Woodend/Hesket is the more in-form team and expect to push onto its fifth win of the season. It won't be a pretty game but a hard-fought one. A margin of 11-20 points is fitting.