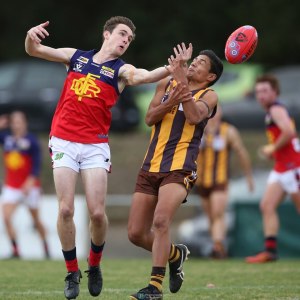 Saturday afternoon seniors footy saw Woodend/Hesket come up against a formidable Diggers Rest side in reasonable conditions. Early on it was neck and neck between the two sides with Slater, Toman and Gawthrop all having an impact on the scoreboard.

The first half was a physical battle with a hot footy, seeing both teams add to the scoreboard. Going into halftime Diggers Rest was only up 12 points and there was certainly a lot of determination left in the Hawks boys. Although, unfortunately, the third quarter is where the game started to open up. Diggers Rest began to break through Woodend’s defence and started to make things difficult. In the end the opposition was able to run away with a 30 point win against our Hawks who fought tremendously hard throughout the match.

Post-game I had a few words with new assistant coach Craig “Clinkers” Clinnick:

“Look I thought today we really improved on the trademark and the fundamentals in which we want to execute and want to be known for both inside and outside the footy club. They were really lacking in our previous two games, probably half the game against Melton and definitely the four quarters against Macedon.

Today we really put it upon the playing group, we had 2 first game players and we wanted it to be a memorable moment for them, and for them to carry through their career. I think we genuinely brought that, we brought effort and we brought game style and game sense. We were able to reduce the opposition in terms of quantity of shots on goal to what they’ve been having the last few weeks. So we defended better, but in general we just didn’t do it for long enough. Our opposition kicked back to back goals on too many occasions, they got a goal right on half time and they got two goals really late in the last quarter that probably didn’t flatter us in terms of the score.

But look in general, some real positives to come out of the game, some youth are getting opportunities to learn the way we want to play and I thought that our playing group applied themselves. I also thought that they learned a lot, and I also thought it was a step forward for us as a footy club in terms of what we want to be known for. We’ve gotta build on that next week and really bring the capability of doing that for longer.

In summary, a step forward, but we’ve still got a bit of a journey to go in terms of a four quarter effort.”

First game back after Interleague Round and the Hawks were hosting the reigning premiers Diggers Rest @ Gilbert Gordon. Heading into this round the reserves boys were 4-0 with plenty of belief they could topple a top side.

Although the scoreboard doesn’t reflect the overall game, throughout the duel the Hawks stood tall and put up a commendable effort. It was just a matter of scoreboard conversion, and the boys simply kicked themselves out of the game.

Post-game I caught up with club figure and on-field leader Rupert Miranda who had a few things to say in summary of their game:

“Look I thought that Diggers turned up here and I thought that we well and truly took it up to them, but at the end of the day it just came down to our conversion on the scoreboard. We had one more scoring shot than them and they ended up winning by 30 odd points. That’s something we’ll be working on at training and doing our best to get back on track.

Diggers are the reigning premiers, top side... But there are definitely good signs for us here at Woodend, we’re having 8 changes every week, we’ve played 44 different players throughout the season. We’re 4 and 1 now so we’re still travelling quite well, and yeah we’ve definitely taken the positives from this game, few negatives but took the majority as positives.

So yeah bit of a learning curve for us, took a few lessons from the way Diggers play and hopefully next time we come up against them we’ll definitely bring home the choccy’s. As long as we can kick straight, we’ll be laughing.”