WOODEND HESKET NETBALL WRAP - B to A Grade - May 27 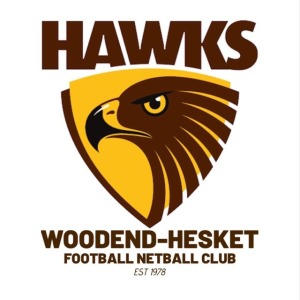 | Wendy Roberts |
B Grade
Having the previous Saturday off due to the interleague round and an additional training session under our belt. The Hawks began the game against Diggers Rest with a stronger mind-set and a clearer understanding of what they had to do as a team.
The high standard of game play this team had experienced against Macedon and Romsey, helped our players to increase their work rate to be competitive in this Diggers Rest game.
Emily Lindner settled into her position of goal shooter and with Bonnie and Rylee sharing the goal attack position, Diggers Rest defenders were kept busy due to the speed on the leads and passes.
Tegan Finch took the centre position due Diggers centre player also being small, fast and zippy. Chelsea played a good steady game, with well-timed leads being effective in bringing the ball down. In our back line, Taylor Bowen was well matched against the wing attack , while Shae and Claire worked hard, continually intercepting the ball and sending it back down court.
The Hawks continually assessed what skills were needed to beat their opponent in the attacking end while the back line surged ahead with their defending intensity. The entire team kept focused on improving.
All four quarters had passages of play that was an impressive display of selecting the correct pass for the right lead. All seven players contributed towards defending which saw Diggers make passing errors. This is a wonderful improvement. Choosing to keep working and not being individually beaten is the first step of strengthening team spirit. It is a rippling effect which begins with one player’s desire to win.
This round six game against Diggers Rest was a good and clean. We as a team are showing signs of truly understanding how each player moves and also how they like to receive the pass. Diggers Rest took this win by only by six goals. I am pleased and proud of the B team, they stayed focused and worked hard and didn’t drop their heads. We look forward to playing them again.
As we continue to train together the WHFNC B grade team will take every opportunity to increase their understanding of errors made, strengthen their weaknesses and bond together.
Well done ladies, as your coach I’m in your corner, always.  Go Hawks

A Grade
The A Grade team are the best players of our club. As a team they bring together their strong individual skill set, athletic ability and strong understanding of court play of the game and at times of opposing teams.
The round six game against Diggers Rest had our A Grade begin using all these elements in successful passages of play. The lineup for the opening quarter was to ensure a strong start and so began this game.
Tara and Jess quickly learnt what style of defence Diggers were playing and in turn out played them, confidence grew inside our shooting circle. Our centre court of Gracie, Britt and Shannon worked well.
With speed on the lead and speed on the pass, they brought the ball down into the attacking end. In defence Ally and Abby quickly assessed the Diggers shooting style of game, working hard to prevent them from getting momentum. By the end of the first quarter we were still in this game, trailing by four-goals
No changes were made going into the second quarter. In the attacking end players were driving forward to the ball, offering a backup lead after passing off the ball.
Through the centre court, Abbey also assisted bringing the ball down the court by driving into space. However, Diggers began changing their style of mid court defence, shutting down our space we enjoy using. In turn our attacking end had to work harder to find the once open space for the placement of passes into the circle.
From the sideline, our play appeared to have lost its drive, not as free flowing, difficult. Diggers Rest were up by seven-goals at half-time.
Into the third quarter, Tara went to goal shooter and Maddy came onto goal attack. This partnership as each round is played is becoming stronger and with Jess playing wing attack, the placement of passes into the circle appeared.
Macca came into the centre with fresh legs making it hard on the Diggers Rest centre and our defending backline remained the same with Shannon and Abbey assisting down court as they ran out of defence. However, Diggers continued to play a mid-court press or mini triangle presses that created visual confusion for our team to find space to run into.
Abbey unfortunately after working extremely hard the entire game, came off injured. All was not lost, Shannon went into goal defence, Macca into wing defence and Britt back into centre. With Ally and Shannon in the circle defending, there was height to cover the aerial passes and speed covering the ground play and success was seen.
Entering the final quarter having lost the third quarter by three and 10 goals down, the A Grade players did not drop their head. With Gracie returning to wing attack, the team was set for the final quarter.
With Tara’s height and Maddy’s speed, space was created and with patience the passes into the circle resulted in scores going on the board.
However, the Diggers mid-court defence kept slowing up our momentum and at times held balls were called by the umpire. With errors occurring, all seven players had to work harder to get the ball back and time was running out.
When pressure is on, the players need to stay closer to the basics. Fast explosive leads, second effort leads, continual defending, short well-placed passes and vision. Vision to make the right decision and speed on the vision, the decision, and the correct pass for the lead given to them. And finally, really understanding how to break through the defence.
By the final siren, we had only lost the last quarter by two goals.
The Hawks had worked together as team, trying to improve both in defence and attack. Diggers Rest took this win by 12-goals; however, we now know what their strengths and weaknesses are. We are capable of beating this team. With commitment to playing their best skills individually and together as a team and the desire to beat their opponent on a one on one and as a team, the WHFNC team will be successful
Go Hawks!