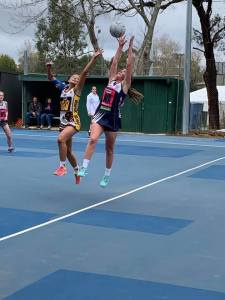 UNDER 17s
Our young guns played their first home game on our GGO court against Melton Bloods, comfortably winning 38-10 and remaining unbeaten at the top of the table.

The team had young Jess Martin step up again from the 15’s due to our key shooter Gemma being injured the day before in the 19’s match and Mikayla being rested after a heavy netball program.

The team didn’t let this bother them as they set to work, scoring 12 straight to 0 in the first, setting up a commanding start.

The lead gave us the opportunity to try some girls in positions that they don’t usually play and try some new combinations. Alice MacDonald-Myers, normally a defensive mid courter, went into the GD position and absolutely starred along with Kate Bartlett in GK. The pair repelled the ball time after time, with Alice out front with the big intercepts.

Although our strength was lost a little due to so many changes being made, our girls extended their lead each quarter to take the game out.

Our sharp shooters were strong once again with a combined 84-percent efficiency.

Well done girls on another great win, but we need to focus on next week which will be a great test to see where we are at as we take on Rupo. Train hard girls. Go Hawks!!

19 AND UNDER
What a game against the Cats in the 19’s!! Our girls took a big scalp to see us sitting on top of the ladder at the end of Round Five.

The match up between these two teams has become a must see battle over the past several years and this game didn’t disappoint. The Cats came to us hungry for a win after we knocked them out in the Prelim final last year and our Hawks were keen to prove that this young new look side could do it again.

The Cats got the jump on us early after some nervous errors. Their tight defence created costly turnovers and our defensive end struggled to stop the easy entry into the opposition goals. We were down by four goals at the first break.

Going into the second term, Jess Thorne moved into defence to provide height against the Cats tall shooter. This gave Abbey and Shae great support and forced their midcourters to delay their entry to goal, which in turn gave our girls a chance. We stemmed their attack and cleaned up our ball movement going goal for goal for a tight 7-7 second quarter but we still needed to make up the first quarters four-goal deficit. We knew we had the talent to succeed but just needed to find the right combination.

Fresh legs in the mid-court and defence proved to be what we needed as Macca was swung into C and Kate Mahon was brought into WD. Kate did a great job at slowing down Cats WA Bianca McKay and Macca enjoyed the hard fought contest against Maddy Brennan through the centre. We were back in the game at the final break being only one-goal down and our huge crowd was going wild!

The scene was set for an entertaining contest in the final quarter with both teams desperate for the win. Both teams made changes throughout the quarter in an attempt to get the advantage. The scores were neck and neck and the individual battles across the court and in the goal circles in particular, was immense. But the team stood strong under the intense physical pressure, with Macca and Gracie continuing to drive the ball down the court and Gemma and Emma netting an amazing 11 out of 12 attempts.

With two minutes to go the scores were locked up at 32-a-piece, but in the blink of an eye we had converted our centre passes and forced a turnover off their centre to see Emma slot the last three-goals of the match from mid-range to take out the game 35-32.

Every player played their part in this win, understanding their individual position and their role within the team.
Macca‘s performance was simply outstanding with crucial intercepts, relentless pressure and strong drive through the court earning her a best on.

Emma was instrumental in goals teaming up with Gemma to shoot at a season best combined 92% accuracy and Jess’s strength in defence was inspiring, keeping their key shooter at bay, stemming the flow from 17 attempts at goal in the first quarter to just 21 attempts in the next three quarters combined.
Fit legs, cool heads, versatility and depth within the team and our full court defensive effort proved to be the game winner.

Special mention to our supporters that turned out in massive numbers, especially Rupe and the rest of the huge footy contingent that filled our new grand stand - having the support of the whole club behind us to create such a great atmosphere, helped lift the girls and gave them an invaluable finals like noise and pressure experience.

Well done on such an awesome win girls - that performance was the epitome of a full four quarter effort and TEAM WORK!! We can use this experience to continue to push ourselves and build for our next big matches in the season ahead! Train hard to play hard! Go Hawks!!

C GRADE
The Hawks were feeling pumped after the exciting win by the 19 and Under team when they took to the court against Macedon.

The team had a great start, leading 9-7 at the end of the first quarter with everyone contributing to applying alot of pressure and causing the Macedon team to turn the ball over.

This week one of our aims was to capitalise on turn overs more and we generally did this well in the first quarter. In the second quarter our concentration dropped a bit and we let Macedon into the game. finding ourselves down seven-goals at half time.

A re-group and a change around of positions saw the team draw the quarter before our intensity dropped away in the last quarter with a few basic errors creeping into the game. The eventual score was 24-35 which was a big improvement on previous games against Macedon for C grade. The team had as much as the ball as Macedon but our passing let us down at various stages and we weren’t able to score a goal from all of the turnovers.

Louise Marendaz played an excellent game, starting in goals then shifting to GK before returning to GA in the last quarter. Her strength under the post was excellent, pulling down numerous rebounds and working hard to get close to the ring to shoot. Lou’s positive presence on court is a real bonus for the team.

Sarah Smith played another great game in GD, never giving up, working hard to take intercepts and get tips in the defensive end, she gives her heart and soul for every game. Monique Deen worked tirelessly in GK, making it hard for the GS to get the ball and also backing up her team mates.

The team knows what we need to do to improve, with a positive attitude and hard work at training we will close the gaps on the teams that are above us. Keep at it everyone, the rewards will come. Go Hawks!