IN THE PRESS | Mental health a focus for Woodend-Hesket 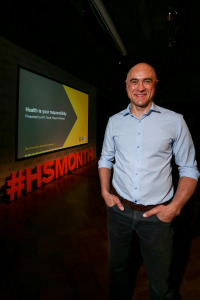 Former AFL champion Wayne Schwass will be among the guest speakers on the day.

Schwass, who played for North Melbourne and Sydney, is a big advocate for mental health, having suffered mental health issues through his playing career.

Schwass has since started Puka Up, which is dedicated to helping the community deal with mental health.

Hawks senior president Paul Podbury said it was important that football and netball clubs were proactive off field.

The town’s junior football and netball, and master football clubs will also be involved in the day.

“Andy Wilson who has done some fitness stuff for us is a Puka Up ambassador,” he said.

“He was able to facilitate it. I’ve played at a Puka Up golf day and the message Wayne has is really good.

“We’ve got players from eight-years-old to 60 years old and I think the message will resonate with the whole demographic.”

Podbury said the session was available for the whole community, not just those involved in the sporting clubs.

He said sporting clubs were a good point to start the conversation.

“Footy and netball clubs are great social networks and it’s about people getting out and getting involved,” he said.

“Our clubs aren’t just about football and netball. We want people to feel welcome and come down to the clubs.”

After the session, the players will take to the football field and netball court for intra club hit outs.

The junior and masters clubs will also hold their registration day before the session for players looking to sign up for this year.

The mental health session is at the Buffalo Sports Stadium starting at 12pm.