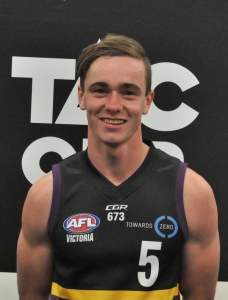 The Murray Bushrangers have boosted their AFL drafted players with Charlie Spargo and Ben Paton joining AFL Clubs in the National Draft held in Sydney on Friday 24th November 2017. Spargo was drafted with selection 29 to the Melbourne Football Club; while Ben Paton was taken with selection 46 to the St Kilda Football Club.

Albury’s Charlie Spargo didn’t appear for the Bushrangers this year after playing Greater Western Sydney Academy early in the season. He then went onto school football with Melbourne Grammar before playing Allies in the National carnival. Spargo injured his shoulder in the first round of the Nationals which required surgery and ruled him out for the remainder of the season. Charlie is a very crafty small forward who will develop into a strong midfield player. He possesses a very high work rate with excellent defensive skills and an uncanny goal sense. His game suits the modern day football trend with elite running and high level game sense.

Such is the TAC Cup program that 19-year-old Ben Paton joins fellow 19-year-old drafted from the Bushrangers in Lachlan Tiziani, Dan Howe, Nick Coughlan and Nathan Drummond over several seasons. After non-selection in the draft last season, Paton returned to the Bushrangers as an overage player and excelled at club, state and national level. Originally from Mitta, North Albury has been Paton’s club over the past two seasons. Paton played as a small/medium defender this year in TAC Cup after excelling as a midfield/forward in 2016. Recognised as a very good kick with both sides of his body, he has excellent speed, (sub 3 sec 20 metre sprint) strong hands and possesses excellent tackling and defensive skills. Ben played on all the good small forwards in the TAC this year and was rarely beaten (Stephenson, Higgins, Miers) etc. He played the entire National carnival with Vic Country and was rewarded with All Australian selection. Paton played 2 VFL games with Collingwood in 2017 in which he adapted very easily.

With the AFL Rookie draft being held on Monday, the Murray Bushrangers are hopeful of several selections in the Rookie draft which is held via afl.com.au online.