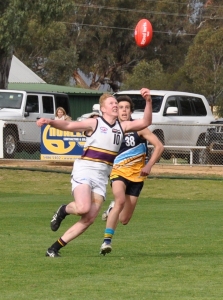 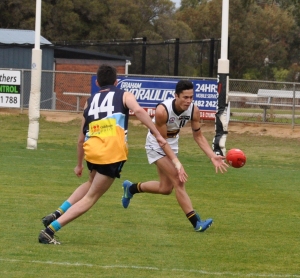 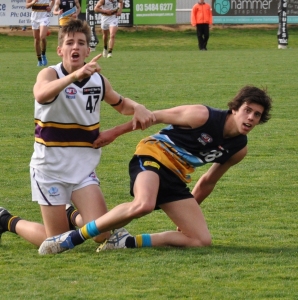 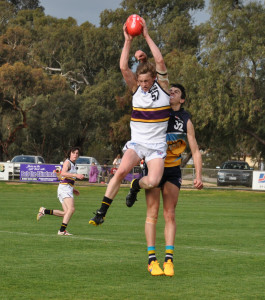 The Murray Bushrangers have cemented their third place finish on the TAC Cup ladder after a 76 point victory in their final round clash with Bendigo Pioneers at Rochester. The win sees the Bushrangers secure the double chance and head into finals with momentum. Clayton Oliver showed his capabilities with six goals moving between the midfield and forward line.

The Bushrangers began the contest kicking against the breeze, and ruckman Max Canfield gave his midfielders great service. Oliver along with Murray Waite provided excellent run and drove the ball forward out of congestion. Defenders Nick Coughlan and Dylan McDonald were superb and rebounded the ball long to benefit their team mates. However The Pioneers were able to hit back through draft prospects Tom Cole and midfielder Joseph Atley. Atley is the brother of former Bushranger and now North Melbourne player Shaun Atley.

The margin at the first break was just four points in the Bushrangers favour with Bendigo having one more scoring shot than their opponents. The second term was a tense affair but the Bushrangers continued to rebound the ball with Coughlan, McDonald, Brady Sharp, Louis Pinnuck and the Lachlan Tiziani using their run and carry delivering to the forwards.

Oliver continued to own the football and gathered numerous contested possessions and kick goals. Late inclusion Luke McKeown was strong in his marking attempts and kicked a beautiful goal to see the Bushrangers extend their lead to 18 points with seven minutes of the siren. Bendigo was able to settle and kicked an answering goal; however with Josh Minogue and Max Lynch providing the Bushrangers targets up forward, the scoreboard was being peppered. At the half time siren, the Bushrangers were out to a 15 point lead.

After being refocussed at the halftime break by Head Coach Darren Ogier and Line Coaches Ross Hill, Adam Mudra, Ben Davey and Peter McIntyre; the Murray boys came out full of run and Max Canfield continued his excellent game with a goal to extend the lead. At the eight minute mark, Josh Minogue kicked a long goal after a great contested mark and the Murray lead was 25 points.

The best play of the day saw Canfield deliver the ball to David Mennen who accelerated through traffic and found Oliver who delivered to Dylan McDonald who kicked truly at goal; and then Oliver after a centre clearance kicked another goal and the lead was 38 points to the Bushrangers. The Bushrangers continued to win possessions and the young brigade of Harry Morrison, Isaac Wallace, Fletcher Carroll and James Cousins were hard in their ball winning ability and used the ball to advantage to see Minogue kick another goal and then on the siren Zach Sproule marked and after opposition backchat was gifted a goal on the line and the lead of 53 points at the last change.

The final quarter saw good individual efforts but lacked the team polish at stages, but Clayton Oliver put the touches on a Best on Ground display with his fifth and sixth goals. Canfield added his second, while Murray Waite, Louis Pinnuck and David Mennen continued to run and create play. The margin could have been in triple figure territory if not for inaccuracy with the final score line of 15 – 19 =109 to 4-9=33 highlighting this.