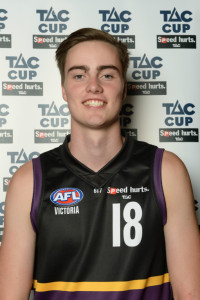 The Murray Bushrangers have put the sword to the Sandringham Dragons in TAC Cup Round 8 actions at the Wangaratta Showgrounds. After leading by just a solitary behind at half time, the Bushrangers clicked into gear and tore away to a 46 point victory. Coach Darren Ogier was pleased with the Bushrangers ability to adapt to the game style and produce an improved performance after the main break.

The Bushrangers started the game with hard hitting contests and Sandringham was up to the battle and went forward first to score a behind. Harry Tanner started well off half back and continually turned the tide in the Bushrangers favour. Nick Coughlan in a Best on Ground display was impenetrable all day and won a mountain of possessions and used the ball superbly across the half back line. Luke Smith kicked the opening goal for the Bushrangers before the Dragons kicked a late goal. The margin was 2 points in the Murray teams favour at the first change.

The second term saw the Bushrangers kick a goal within the first 50 seconds of play through emerging forward Trent McMullan. David Mennen continues an excellent vein of form and won plenty of possession through the midfield. The Dragons again replied from a Bushrangers turnover; before Max Canfield took control in the centre of the ground and kicked a long goal. On the back of great teamwork the ball went through the hands of Coughlan, Sproule, Canfield and Bowen Smith before Murray Waite kicked the Bushrangers fourth goal of the day. Brady Sharp was strong in defence but Sandringham scored goals in time on and the Murray lead was just 1 point at the main break.

During the half time break, the Bushrangers were forced to dig deep to sway the momentum; and that is what they did when play resumed. McMullan was again in the action early taking a courageous mark going back with the flight of the ball into a pack. He steadied and goaled and then Josh Minogue also bobbed up for a goal.

Coughlan and Tanner linked well from defence and found Mennen on multiple occasions which allowed McMullan to kick his third goal of the day. From a quick turnover Sandringham goaled but was answered through a team lifting goal from Zach Sproule.

Another Sandringham goal was answered when Murray Waite burst through five Dragon opponents in two packs and kicked to Minogue who marked strongly. Minogue kicked the goal and then from the very next contest Luke Smith burst from the midfield and kicked long over the pack and got the perfect roll to add another Bushrangers goal and take the Murray team to a 27 point lead at the last break.

The final term started with a rush from the Bushrangers and in particular Luke Smith who ignited for the home team kicking three goals to take his game tally to five. The midfield took control through Mennen, Waite and Canfield, supply the forwards in McMullan, Smith and Minogue with plenty of opportunities.

After an Interleague Bye / Community Development Round next weekend, the Murray Bushrangers will head to Darwin the following week to do battle with Northern Territory at TIO Stadium on Saturday 30 May.