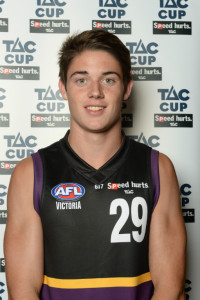 The Murray Bushrangers will go head to head with a strong New South Wales / ACT Rams TAC CUP side in a cross border battle at the Albury Sportsgrounds this Sunday.

The Rams have won both of their TAC CUP outings this season and will provide a strong test for a Murray Bushrangers team coming off a morale boosting 4 goal win over TAC CUP powerhouse the Calder Cannons.

Bushrangers coach Darren Ogier said the Bushrangers always have this game pencilled in once the fixture is released; “it is a great rivalry between the Bushrangers and Rams”. “The Rams have made a real impact on the competition over the last two weeks and our boys will need to be up for one of their biggest challenges of the season thus far”.

Ogier was pleased with last week’s performance with a number of players in good form “Murray Waite, Jake Marshall, Ryley Sharp, Fletcher Carroll & David Mennen provided drive through the middle of the ground”. “Up forward Josh Minogue continues to present, Josh Schache is providing strong presence and Trent McMullan is the leading contested mark player in the competition”.

“Brady Sharp & Ryan Garthwaite are playing their role in the backline and Nick Coughlan is providing leadership whilst rebounding strongly off the half back line”.

The Bushrangers welcome back Albury’s Lachlan Tiziani, Yarrawonga’s Max Canfield and Sheppartons Julius Battista who all return from injury.

The game will be played at the Albury Sportsground from 12.00pm this Sunday afternoon.