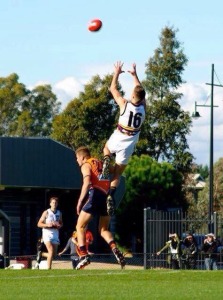 The Murray Bushrangers have scored their first win in more than five years over the Calder Cannons at RAMS Arena in Craigieburn. In front of a healthy crowd the Bushrangers led from start to finish and survived a second quarter scare before running out comfortable 26 point victors. Coach Darren Ogier was chuffed with the victory which sees the Murray team at 3 wins and 2 losses heading into next Sundays clash with the NSW/ACT Rams at the Albury Sportsground.

The Bushrangers started the day kicking with a strong breeze and took advantage with four goals to nil, but also managed 6 behinds. It was great to see Ned Nihill debut for the Bushrangers as the 23rd man with Harrison Payne (Corowa Rutherglen) & Shaun Mannagh (North Albury) playing their first game of the season. Harry Tanner kicked classy goal to open the Bushrangers goal account after 6 minutes of play. Luke Smith kicked his first of the day from silky delivery from the midfield. Josh Schache in his second game of the year hit the scoreboard in the 23rd minute to give the Bushrangers a quarter time lead of 28 points.

The second term saw the Bushrangers struggle with their kicking into the breeze and Calder kicked long with the breeze and got the desired results. Calder was able to kick 4 goals, before Murray kicked the only goal of the first half into the gale. A beautiful long kick by Trent McMullan saw the Bushies keep the lead at half time by 5 points.

At half time, Bushrangers Coach Darren Ogier spoke to the players about sticking to team guidelines and using the ball appropriately. The Murray boys responded and took control of the game through midfielders David Mennen, Murray Waite & Dylan McDonald while forwards Trent McMullan and Josh Minogue were great in their movement and attack on the football.

Luke Smith kicked two superb goals including one from the boundary and a long snap from 40 metres out. Murray dominated across the ground kicking four goals whilst restricting Calder to just three behinds for the quarter. Bowen Smith tackled hard and was rewarded with a great goal, while another goal to McMullan saw the Bushies to a lead of 31 points at the last change.

The final term saw the Bushrangers kicking against the strong wind, and after Calder scored an early goal, the Bushrangers again took control and moved the ball in patterns against the breeze to great effect. The Bushrangers were able to kick their 10th goal of the game through a superb kick by Josh Minogue; and while Calder kicked their sixth late in the term, the game was sealed with the Murray Bushrangers returning to the winners list with a 26 point victory away from home.

After the game Coach Darren Ogier was thrilled with the win, and pointed to the fact that with a shared workload across all players the results are positive. The Murray Bushrangers next challenge is against the inform New South Wales / ACT Rams outfit at Albury Sportsgrounds from 12.00pm on Sunday 10 May.