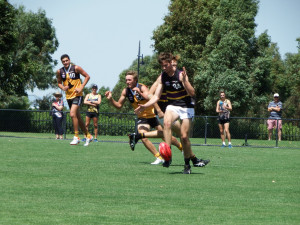 The Murray Bushrangers will tackle last season TAC CUP premiers Oakleigh Chargers at the Wangaratta Showgrounds on Anzac Day. Both teams have been in great form to start the season with the game shaping as match of the round in the top of the table clash.

Murray Bushrangers coach Darren Ogier highlighted the significance of playing football on Anzac Day. “It is a unique opportunity to play football on Anzac Day, each player lucky enough to be selected will be giving their all in what promises to be a great game against a top class outfit”.

The Bushrangers regain AFL Academy player Dylan McDonald along with David Mennen who returns from a stint with Collingwood in the Victorian Football League.

Mansfield young gun James Cousins will make his debut following outstanding form for Mansfield in the Goulburn Valley Football League. “James has had really good preparation and if it wasn’t for his cricket commitments would likely have played in round 1, he runs hard, uses the ball well and thoroughly deserves his opportunity”.

The TAC CUP fixture is being supported by the Wangaratta RSL who will conduct an ANZAC SERVICE prior to the game from 12.45pm.

MURRAY BUSHRANGERS LINE UP ROUND 4 vs Oakleigh Chargers