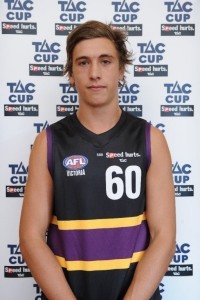 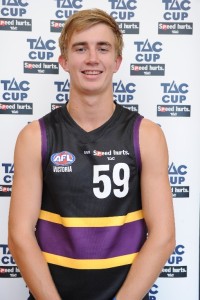 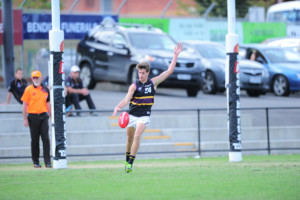 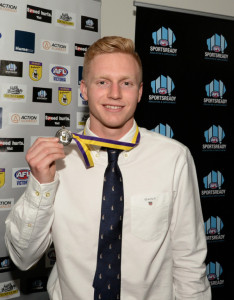 Murray Bushrangers Talent Manager Lee Fraser was thrilled with the result, ‘To have four of the boys picked up in the National Draft is a great reflection on the Murray Bushrangers Football club its staff and volunteers who continue to provide an elite environment for talented young footballers’. ‘Each player has their own unique story, each of them have been supported by coach Darren Ogier and his team of assistants, High Performance Manager Matt Glossop together with a first class medical department’.

Benalla’s Caleb Marchbank was always likely to be picked in the top 20 but few at the club were surprised when his name was read out by GWS with pick number 6. Fraser spoke highly of Marchbank ‘Caleb has been very unlucky with injury over the last two seasons but what he was able to achieve in 10 games this year was quite outstanding’ ‘He performed superbly across all 6 games with the Victorian Country team both in defense and attack and his leadership across our football club during the season has him universally respected amongst our staff and players’

Daniel Howe (Rennie) capped off a superb 2014 season by being named with Hawthorn’s first pick (31). Following an interrupted 2013 campaign due to private school commitments, Dan was able to fully commit to his football this year and has continued to meet very challenge. “Dan’s ability to perform at all levels this season has been a real strength, his TAC CUP, National Carnival and VFL form provided the platform for his selection by the Hawks”. Runner Up in the Best & Fairest Dan is an outstanding character who will adapt well to the AFL environment.

After missing selection in the 2013 Draft, Mooroopnas Nathan Drummond was finally rewarded by being picked up by the Richmond Football Club with pick number 52. “Nathan is the pin-up boy for our 19 year program, following private school commitments in 2012/13 Nathan has thrived by being involved in our club full time”. “Nathan was understandably devastated after last season’s draft but responded instantly with a huge pre-season which provided the platform for his Best & Fairest award in 2014”

Nathan was exposed to the Richmond VFL program and it was there that his attitude, work rate and ability caught the eye of the Richmond recruiters. Nathan already has an AFL attitude and will settle in nicely to the environment.

The Bushrangers draft smokey was always going to be Albury’s Dougal Howard who was selected with pick number 56 by Port Adelaide. Howard fully committed to his football in 2014 by moving from his home in Wagga to Albury ensuring he was exposed to a full season of TAC CUP football. Howard is an elite athlete who has grown to 199cm and will provide a great key position / ruck prospect for Port Adelaide in few seasons time.

“Dougal benefited from a full season in the TAC CUP, playing 15 games this season he was able to get a sense of what is required at the next level”. “His workrate improved throughout the season and he definitely has the attributes to be a very good AFL footballer”.

Fraser was quick to highlight that all is not lost for players not selected with the AFL Rookie draft to be conducted on Wednesday December 3. ‘We will quickly turn our attention to the Rookie draft in the hope that a few more boys will be given an opportunity’. ‘That aside there is a clear pathway for talented footballers and that doesn’t stop at the TAC CUP, there are number of opportunities to pursue an AFL dream through the VFL’.