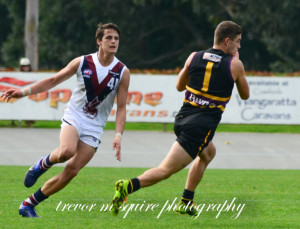 The Murray Bushrangers head into Round 16 of the TAC Cup full of confidence after a strong wins over the Western Jets and Tasmania in the last two rounds. The challenge doesn’t get any easier when they host TAC CUP powerhouse the Calder Cannons this Saturday at Norm Minns Oval in Wangaratta.

Coach Darren Ogier believes the squad is determined to step up this week, “The Cannons were the one side early in the year that really got on top of us, the boys are really motivated to play them on our home ground and continue the momentum of the last two weeks’.

“The energy on the training track has been first class and you can feel the excitement within the group, finals are at stake and we are determined to take out chances’

A win this week would go along way to securing a finals berth for the Bushrangers who currently sit in 8th position equal on points with the Western Jets (7th) and a game clear of the Eastern Ranges (9th). “It the time of the season where as coaches we ensure the boys are working hard for each other with a real team focus, ultimately football is about contributing towards team success

The Bushrangers are also pleased to announce that Lavington youngster Connor Byrne will make his TAC CUP debut for the Murray Bushrangers.

Byrne (16) led the New South Wales / ACT Rams under 16 team to the Divison 2 Championship in July, being named players of the carnival. Talent Manager Lee Fraser described Byrne’s pathway to the Bushrangers ‘Connor has been playing Ovens & Murray senior football with Lavington and as captain of the Rams Under 16 team has demonstrated great maturity and leadership’

‘Connor is a hard running midfielder who can win his own football and distributes well by hand and foot, having played senior football we are confident we will step up to TAC CUP level. ‘It is always an exciting time of year when young players to their opportunity, it will be a great experience that will assist in his development’

This weekend’s game is on Saturday afternoon from 1.00pm at the Wangaratta Showground’s