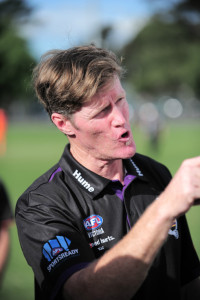 The Murray Bushrangers head to Highgate Recreation Reserve in Craigieburn this Saturday to host the Tasmanian Under 18 Team. Following a morale boosting victory over the Western Jets in their last round the Bushrangers with four games remaining in the season will be looking for two wins in a row.

All Australian under 18 defender Caleb Marchbank will miss the remainder of the season with a knee injury. Marchbank who has performed brilliantly throughout the TAC CUP and then National Carnival will undergo surgery next week before commencing his rehabilitation program with the Bushrangers. Caleb will be fit commence pre-season training in October / November.

The Bushrangers will debut 16 year old Jy Simpkin from the Mooroopna Football Club, Jy who performed well for Victorian Country in the recent Under 16 nationals is a hard running skillful midfielder.

‘Jy has been with the Bushrangers program through under 15’s under the guidance of Greg Liddell and Mick O’Dwyer and earlier this season he represented the Bushrangers under 16’s before being rewarded by representing Vic Country in the Under 16 National Carnival.

‘The TAC CUP provides yet another step up in standard that will give Jy a great insight in what is required to be a TAC CUP player’ ‘A key part of Jy’s development has been the support and opportunities provided at the Mooroopna football club where he made his senior debut (3 goals and 25 possession’s) earlier in the season’.

Bottom age players Nate Trotter (Euroa), Levi Middleton (Finley) and Michael Reidy (Mooroopna) all come into the side for this weeks clash.

Coach Darren Ogier was confident of a good result against a strong Tasmanian outfit ‘I watched the Tassy squad play at Windy Hill a few weeks back and they have some good players we will need to keep a close eye on’.

‘It is disappointing to lose experienced players through injury, however we feel that we have the depth in the list to perform well and hopefully be in the final 8 at the end of the round’.

This weekend’s game is on Saturday afternoon from 1.00pm at Rams Arena in Craigieburn