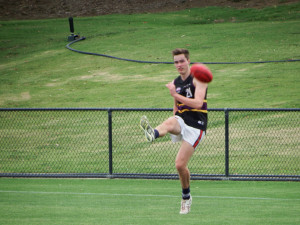 The Murray Bushrangers tackle one of the greatest challenges in TAC CUP football when they take on Gippsland Power on their home ground at Morwell Recreation Reserve on Good Friday.

With both sides coming off convincing round 1 victories it promises to be an even contest with both sides displaying outstanding young talent across the ground.

The Bushrangers will head into the clash without power forward Josh Schache (Seymour) and running machine Dylan McDonald (Albury) who will represent the AFL Academy over the next two weeks with games against Werribee VFL & Northern Blues VFL teams.

Benalla’s David Mennen will also miss following a call up to the Collingwood VFL team. “David Mennen, Josh Schache & Dylan McDonald have all been outstanding over the pre-season and the next two weeks provides a great opportunity for their development, we look forward to having them back in a few weeks time” TAC CUP Coach Darren Ogier said.

“With three senior players out of the sides it provides a great opportunity for others to step up and make their mark within the team and on the competition. Our GPS data indicates that a number of midfield group are working extremely hard both offensively but also defensively, this work-rate will be critical against Gippsland this week’.

‘It has been pleasing to be able to hit the scoreboard, with 24 goals spread across key forwards and midfield runners a real highlight’. “Our work in the back half was exciting at times with run from half back creating opportunities further afield’

“Whilst games against Gippsland in Morwell always provide a challenge, it is great to spend more time together with a bus trip and overnight stay providing a great opportunity to continue to building momentum gained over the pre-season.

The Bushrangers welcome two debutants into the team including 206cm Deniliquin youngster Kyle Galloway who has overcome a season ending finger injury in 2014 to earn a place in the Bushrangers line up. Numurkah product Luke McKeown has recovered from an injury interrupted pre-season and has been promoted off the clubs rookie list to be named in the forward pocket for his first game of TAC CUP football. Dynamo Levi Middleton (Finley) has recovered from injury and will play his first game for the season. .

This weekend’s game commences at 1.00pm at the Morwell Recreation Reserve with the Under 16’s commencing at 11.00am. For any queries relating to the Murray Bushrangers please contact Talent Manager Lee Fraser on 0402414 476 or via email lee.fraser@aflvic.com.au;

MURRAY BUSHRANGERS LINE UP ROUND 2 vs GIPPSLAND POWER