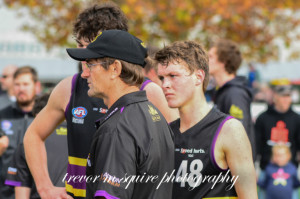 The Murray Bushrangers have announced their 2015 TAC CUP leadership group, six players from across the region were voted in by their peers at last week’s Pre-Season Camp.

Jake Marshall (Deniliquin) – Jake is a talented on baller who played a prominent role with the Bushrangers as a bottom age player in 2014. A strong work rates both with and without the ball and a big pre-season has Jakes ready to help lead the group in 2015.

Murray Waite (Wangaratta Magpies) – Another talented hardworking midfielder who was a standout bottom age performer in 2014. Recently elevated to the Victorian Country Academy program his leadership has been a highlight of the pre-season training program.

Dylan McDonald (Albury) – AFL Academy players whose professional approach to the game provides a great example for others to follow. Dylan is an outstanding runner who can play in a number of positions using his skill and athleticism.

Shaun Mannagh (North Albury) – One of the clubs best performers over the pre-season before injuring his foot. Following a number of senior games with North Albury last season Shaun displayed great run through the midfield and defense in 2014.

Mitch King (Wodonga Bulldogs) – 199cm ruckman injured his ACL in 2014 but his professional approach to his rehabilitation has earned the respect of all involved with the club. A Victorian Country Under 16 player Mitch is aiming to return to the field in the early rounds of the TAC CUP season.

In announcing the group Talent Manager Lee Fraser highlighted that each young man will bring a different element to the leadership mix. ‘All six are outstanding young men who offer great strengths to lead the group behaviours of respect, trust, professionalism & selflessness’.

The Murray Bushrangers THALES leadership group will be overseen by former backline coach Laurie Hammond. Hammond has had over 20 years’ experience in the TAC CUP working previously with the Western Jets. “Through a partnership with THALES our has been able to increase our leadership program in 2015, we look forward to working with this group of young men throughout the season” Fraser said.

The Clubs first game of the TAC CUP Season will be on Saturday 28th March against Bendigo Pioneers at the Benalla Showground’s.