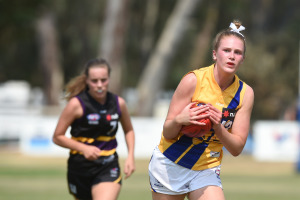 For the first time ever, the Jets girls have secured back to back wins in their short history. The Dragons fell to the Jets last Sunday as Western walked away from Werribee 12 point victors. Sandringham challenged Western late but the damage by the Jets early on caused their downfall.

The opening bounce the Jets were hungry for the ball and they let the Dragons know it. Montanna Ham and Jasmine Goodman were popping up and claiming marks inside 50 like their name was on it. Ham kicked the first goal of the day but a quick reply had Sandringham bounce back. The Dragons would end the first term two points in front but the margin quickly changed.

On the second siren, the Jets raised the bar. Isabella Granat and Elisabeth Georgostathis were racking up the possessions and Isabelle Pritchard proved a rock in defence. Taylah Kolevski was dominating the hit-outs and the midfield took full advantage. Goodman took a towering mark over her opposition to mark in front of goal and made no mistake. Goodman was becoming a real target up forward as the Jets head into the end of their season.  A back and forth style of play would ensure for some time leading into the third term, but after 20 minutes of no score, Goodman kicked her second of the day.

The last quarter had the Dragons hammer the Jets defence. They were winning the contested position and Western's backline was under siege. Luckily enough Pritchard and Georgostathis rebounded everything that came their way. Pritchard had dominated her opposition all day and wasn't allowing any cheap goals to escape her backline. Only one behind was achieved by Sandringham despite the late blitz. Western can look to their last game of the season where they will meet Dandenong Stingrays.

Hero of the Day: Isabelle Pritchard

Her ability to defend whilst being a ball magnet has seen Pritchard become Western's most pivotal cog in the backline machine. Always plays in front of her opponent, and if she can't mark the ball she will bring it to ground. Pritchard finished the day with 18 disposals, 5 marks, and 8 rebounds.