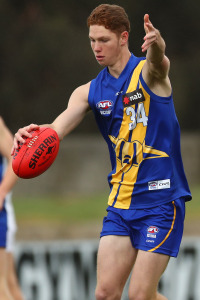 It was Tasmania who hit the scoreboard first after some great forward pressure resulted in the Devils first goal. Tasmania looked full of confidence winning plenty of balls early in their hometown. The ball was living in the Devils forward line but the returning Jet Darcy Cassar was rebounding everything that came his way. Tasmania had plenty of shots at goal early but failed to convert receiving little reward for their efforts. However, the Devils had kept the Jets scoreless for the first 20 minutes. Finally Aaron Clarke bloke the ice and the Jets were on the board. A good piece of late play saw the Jets hit the front after some fancy footwork by Archie Manton to end the first term.

The second term had Western start to get a feel for the game. repeated inside 50's sent Tasmania's defence into a panic. Nash Reynolds had the ball on a string for Western making a real difference in the clearances. With goals hard to come by Cassius White pulled a Stevie J from the pocket. More brilliance was shown from Josh Honey who danced around Devils streamed inside attacking 50 and nailed the last goal of the second term.

The third quarter had Jonah Horo strike first with a snap from a stoppage. Tasmania was matching the Jets for pace and pressure but Western slowly started to take control. The Devils managed to peg back the margin with their second mayor but the Jets made it extremely hard for them. Eddie Ford responded by unleashing a monster from the paint of 50. Ford followed up his work from a tight kick from the boundary that went straight through the big sticks. At this stage, the only thing beating the jets was their inaccuracy in front of goal.

The final term had a tug of war consume most of the quarter. Honey kicked his second after the 12-minute mark. Both clubs were tired and beaten but Western could take their time as the clock wound down. A great pack mark from Manton gained him his second major which was soon followed by his third with a quick kick off the deck. Tasmania snuck a late consolation prize but the end result was a massive win by the Jets.

Hero of the Day: Darcy Cassar

Cassar is like a wall in the backline, can go over him, can't get around him, can't go through him. Intercept marking combined with the ability to always play in front is starting to make Cassar look like an elite defender. He finished the day with 26 disposals, 10 marks, and 6 rebounds