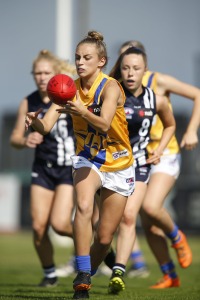 WESTERN JETS: 1.3 I 2.3 I 4.8 I 5.8 (38)
TASMANIAN DEVILS: 0.0 I 0.0 I 0.0 I 0.1 (1)
Goal Kickers: E. Quinn 2, J. Goodman 2, C. Saxon-Jones
Best Players: E. Georgostathis, J. Goodman, L. Wright, I. Pritchard, P. Ozols, R. Tripodi
Last weekend the Jets were a force to be reckoned with. Their academy players had returned and they took Tasmania to the cleaners. The end result saw the Jets blast the Devils by 37 points.
The opening bounce started with Western bringing the intensity early. Cleo Saxon-Jones had returned and was clunky marks inside 50 with her partner in crime Jasmine Goodman. Goodman would kick the first goal for the Jets after a hard ball get and a snap around the corner gave Western a positive start.
The second quarter saw Tasmania kick things up a notch, they controlled the clearances but couldn't penetrate the Western defensive wall. Isabella Pritchard led the backline, every ball that came into the Jets defensive was punched or kicked in the opposite direction. Elisabeth Georgostathis was playing sweeper again creating slingshot plays that sent the Devils into a panic. Saxon Jones-popped up again in the Jets attacking 50, but this time she slotted her first major with little difficulty.
The third term saw Georgostathis as a class above the rest. Her ability to hit targets, intercept mark, and dance around her opponents, was nothing short of A-grade. Her efforts saw the Jets kick another through Emma Quinn. The intensity rose again as Ruby Tripodi and Payton Ani Ozals found another gear. Even the u16 representatives Charlotte Baskaran and Montana Ham were showing their worth as the game went on. Western had all the answers before the last act as Goodman kicked her second goal to end the term.
Tasmania was kept scoreless to this point, the Jets had taken everything and gave their visitors nothing. Quinn would kick another for the Jets early which left Tasmania beaten and confused. the Devils would manage one behind but that is all they would take. This game belonged to the Jets recording their second win of the season.
Hero of the Day: Elisabeth Georgostathis
If Vic Metro doesn't have Elisabeth Geogostathis in their team again for the 2019 u18 National Championships, there is something seriously wrong. Her efforts last Friday would make the likes of Scott Pendlebury smile as she left the rest of her opposition running in slow motion. Georgostathis finished the game with 24 disposals, 7 tackles, and 3 defensive rebounds. Each week she seems to reach a new level of skill as she heads toward the end of her youth girls career.