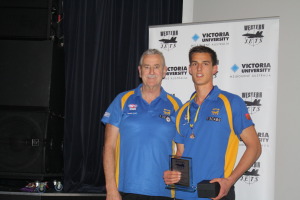 On Monday, September 12th the Western Jets Football Club held the 25th Barry Round Medal. There were 186 guests in attendance at the Yarraville Club which once again hosted a fantastic night.

The Club was very fortunate to have Dan Lonergan MC the night and did a wonderful job. Special guests on the night were former Western Jets player Corey Ellis who now plays for the Richmond Football Club and Simon Dalrymple who is the National Recruiting Manager at the Western Bulldogs Football Club.

There were a number of award winners on the night:

Brodie (pictured with Ray Stevens) lead the vote count from Round 1 and was never headed on top of the leader board outlining what a magnificent season he had.

Congratulations to all of the award winners!