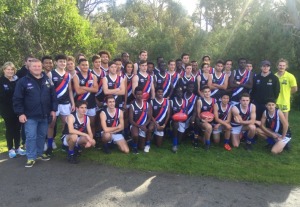 The Western Jets Majak Daw Squad was made up of 43 players from a Multicultural Background living in the Western Metropolitan Region of Melbourne. The Majak Daw Squad played two matches throughout the day defeated the Neville Jetta Squad from Dandenong and the Andrew Walker Squad from Northern in what was a fantastic day of football played in good spirits at an event ran by AFL Victoria.

The Majak Daw Squad members pictured below had a great day and everyone involved witnessed some magnificent football played by some very talented young footballers.