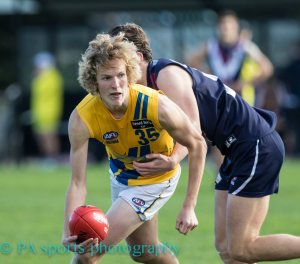 The Western Jets were able to win their second match of the season and first win since Round 1 on Sunday as they held off the Bendigo Pioneers by 14 points.

The Jets started slowly and trailed at 1/4 time by 8 points but in the second and third quarters the Jets played some of their best footy to date. In the second term the Jets kicked 3 goals to 1 and it was on the back of an increase in intensity which was outline by 24 tackles for the term, the highest quarter total for the season to date.

During the half time break with the Jets holding an eight point margin the wind picked up and was favouring the end that the Jets were kicking in the third quarter. We took full advantage of the wind to kick 7 goals to 1 and lead by 47 points at the three quarter time break.

The game was by no means over at that stage however as the very competitive Pioneers outfit came out firing in the last quarter and took it right up to the Jets in the last. Fortunately we were able to hold on for a 14 point margin which improves our record to 2-5. We face arch rivals the Calder Cannons on Saturday, May 28th at Burbank Oval in a must win match.