13CABS Where Are They Now? 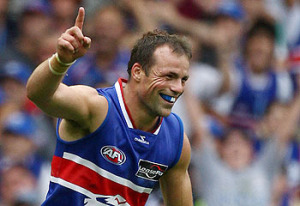 Six champions of years gone by were inducted into the AFL Hall of Fame last Wednesday night and former Western Jets player Brad Johnson was one of those.  Brad was born and raised in the western suburbs of Melbourne and never had to move far during his illustrious career. Originally from Hoppers Crossing, Brad played for the Western Jets before being selected by the Western Bulldogs with pick 11 in the 1993 National Draft. In a career spanning 17 seasons, Johnson amassed a club record 364 games, along with 558 goals.

Since retiring at the conclusion of 2010, Brad has taken up numerous media position, including his primary role on Fox Footy, appearing weekly commentating games. He has also held positions on 3AW football and Mix 101.1 as their resident football expert.

North Sunshine junior and Western Jets draftee Will Hoskin-Elliott is continuing to make strides forward in his 3rd season at AFL level.  Selected with pick number 4 in the 2011 National Draft by Greater Western Sydney, Hoskin-Elliott was identified as a player with elite pace and outside run, recording brilliant results at the AFL combine with a 15.12 beep test and 9.53 minute 3km time trial.

After playing only 12 games for the Jets in 2011 and still managing to finish second in the Barry Round Medal, it was little wonder Hoskin-Elliott didn’t have to wait long to debut, lining up for GWS in round 1 2012’ the clubs first ever game. At the conclusion of his first season at AFL level, Will finished with 10 games under his belt, including a 20 possession 5-goal game against Gold Coast in round 20. Battling form and injury issues, Will could only add a further 9 games in his second year at GWS, taking his career tally to 19.

2014 has seen a turn-around in those form issues; with Hoskin-Elliot playing 10 of 11 games to date, well and truly cementing his place within the senior side.

Former Altona junior and Western Jets player Jason Robinson made his debut for Werribee in the VFL on the weekend. The 18 year old finished with the Jets at the end of last season, moving to Werribee but suffered a setback with injury during pre-season. Returning a month ago, Robinson played in the Development League before earning a call up to seniors on the weekend. With 20 possessions and 2 goals, Robinson might just find himself a permanent fixture in the side.