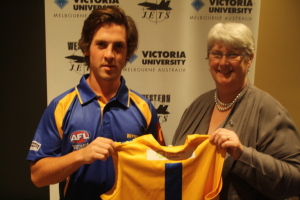 Last Friday on March 14th the Western Jets held their Jumper Presentation Night at Victoria University, Sunshine Campus in what was a successful evening with over 150 people in attendance.

All 50 players on the Western Jets list were presented with their playing jumper's for season 2014 and the leadership group were announced. The members of that leadership group were Liam McMahon, Liam Duggan, Jayden Laverde, Braden Ferrari, Lachlan Knight and Mark Orr. Liam McMahon was named the captain of the Western Jets for season 2014 and along with that also received the Nathan Prince Scholarship which will be put towards his studies at Victoria University.